A monstrous mash: Behind the latest Halloween Terror skins

The spookiest event of the season has returned to Overwatch, bringing with it a slew of sinister new skins guaranteed to transform every battlefield into a graveyard smash. Some of the treats you might find in your Loot Boxes this Halloween include Echo’s blood-chilling Vampire Bat attire, a grim new getup for Bastion, and the styled-to-slay Vampire Hunter Brigitte.

To celebrate this frightful event, we caught up with concept artists Daryl Tan and Morten Skaalvik to discuss how they approached designing three of the latest Legendaries.

Halloween Terror gives the minds on the Overwatch team a chance to indulge their spookiest artistic senses. From ‘80s slasher flicks to man-eating fox-girls, creative and cross-cultural ideas are drawn to life by a team of talented artists each event. As for this year’s lineup? It’s one of the most bewitching yet, featuring new additions like robots remodeled into final resting places. 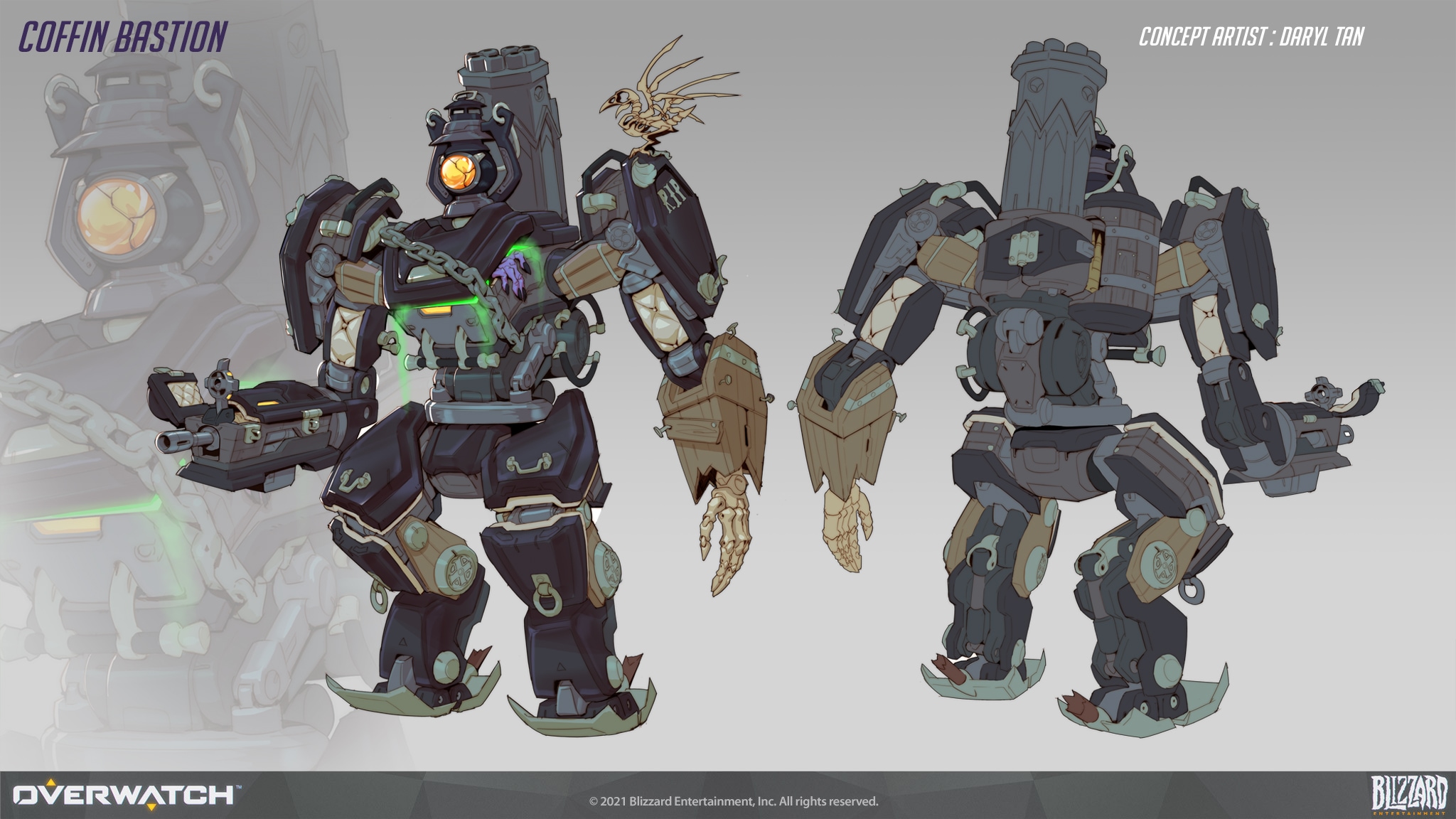 While he was excited about the prospect of penning a few skin ideas for this year’s Halloween Terror event, Coffin Bastion was, at first, a challenge for Tan to concept. “All I had to work with as a theme was ‘coffin,’” Tan says. “I had to find as many ways as possible to shape and design a bunch of coffin ideas onto him.”

To give Bastion a sufficiently spooky makeover, Tan blended overt graveyard ornamentation with other subtle details: a gravekeeper’s lantern perches atop an oozing sarcophagus that has been chained shut to keep its undead inhabitant from escaping. Gone are the polished gears and metal plates of an omnic, replaced by quilted casket lining, wood, and stone embellishments reminiscent of mausoleum exteriors. There’s even a skeletal hand bursting from a coffin attached to Bastion’s forearm. And Tan’s favorite detail? The way Bastion’s submachine gun has been transformed into a tiny open casket, complete with a crosshair headstone. “Designing that made me chuckle a couple of times to myself as I was drawing it,” says Tan. 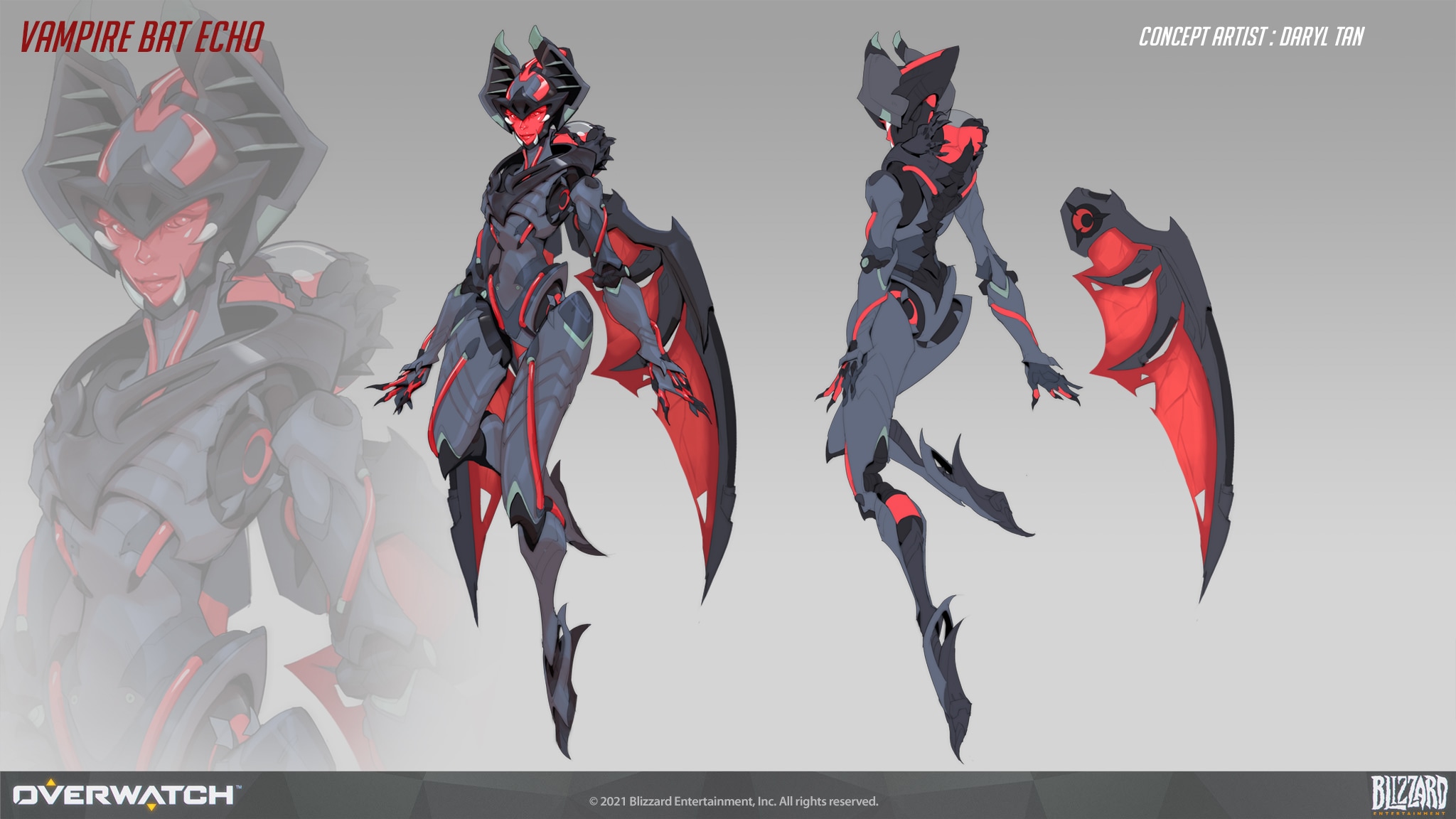 Coffin Bastion isn’t Tan’s only contribution to this year’s looks. He also had a hand in the creation of Echo’s Vampire Bat skin—a haunting departure from her sleek, cutting-edge base model. “The Echo skin was super fun to draw since the idea of her being a robotic vampire bat was a compelling theme to me,” Tan says.

Echo’s new ensemble is composed of sharp gothic forms that would fit perfectly in with the foreboding facades of any self-respecting vampire’s castle, augmented by bits of future-forward technology to transform her into an apex predator. After nailing her basic form, Tan indulged in a bit of “spooky fun.” To give the design that final, creepy twist, he added in a few macabre accents. Tubes coil around Echo’s body and feed vital fluids into her system. Clawed hands clutch a blood-filled vessel behind her head. Topped off with a sizable pair of ears, she’s ready to Echo-locate her way around the fray this Halloween.

Ready to face down Vampire Bat Echo on the frontlines is Vampire Hunter Brigitte. Her hunt-ready regalia was designed by concept artist Morten Skaalvik, who was delighted to have the opportunity to fashion a Halloween costume for a fellow Scandinavian. “This skin was a blast to work on since it was such a team effort,” Skaalvik says. “I designed the original thumbnail and then Armando, one of our outsource artists, made the final design. Then, [concept artist] Ben Karr wrapped up the whole thing by concepting her weapons.” 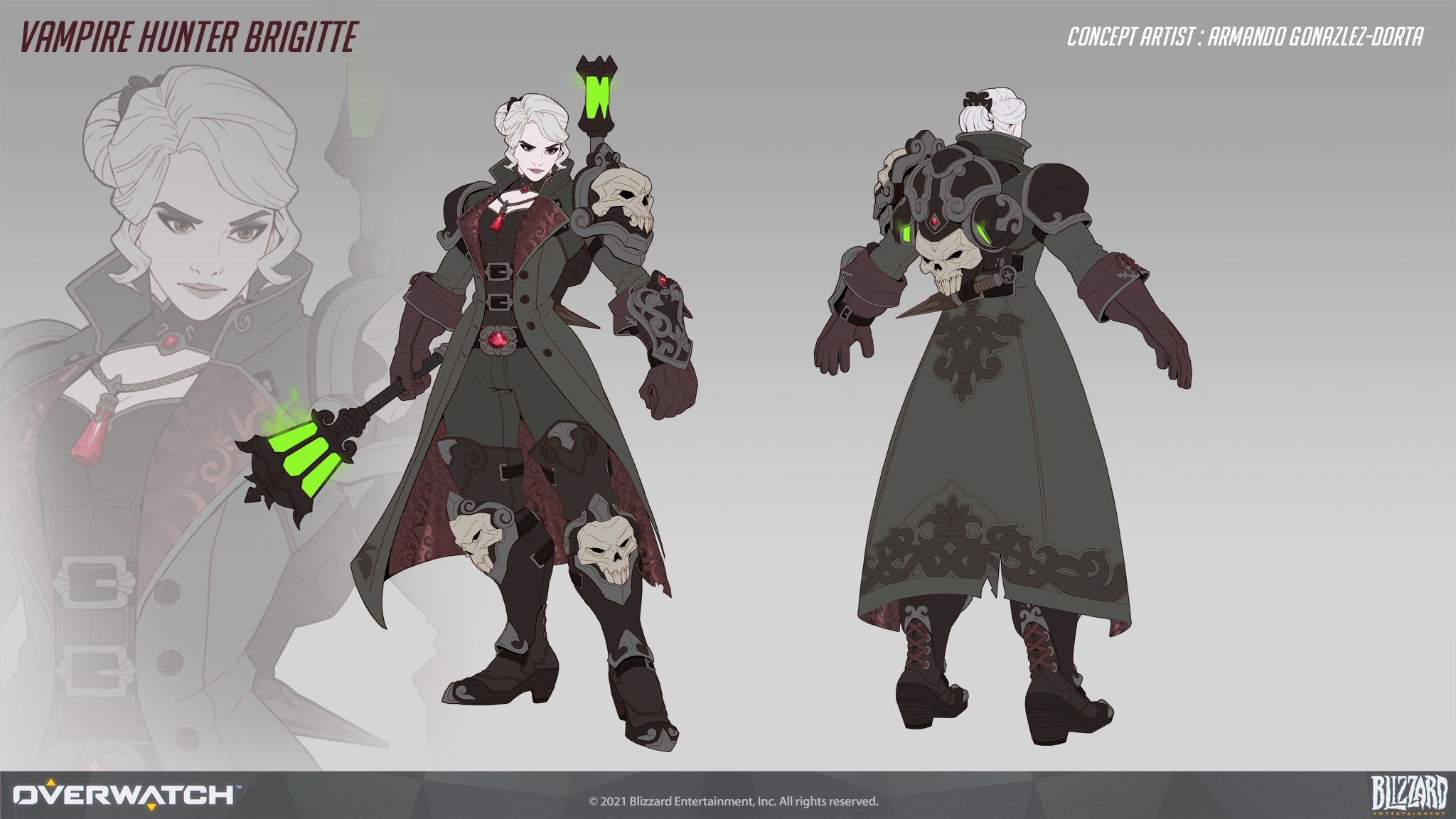 The team iterated on several different ideas before finally settling on the vampire theme, Skaalvik recalls. The initial sketches, which portrayed her as both a killer and a demon, didn’t feel like they fit with Brigitte’s plucky personality. “We eventually decided to try a vampire hunter theme, where the idea was that she didn’t need to be a monster, but could be the one protecting you from them,” says Skaalvik. The concept felt truer to her chivalrous character and resonated with her gameplay, as well.

Inspiration for Brigitte’s outfit and other trappings came from a variety of places. While a mantled duster (with plenty of straps and buckles, of course) and a pair of combat-ready boots are staples in every vampire hunter’s wardrobe, Brigitte needed something to set her apart from other slayers. The addition of accoutrements like pauldrons, a skull-adorned backpiece, and a few dashes of ghastly green both preserve her in-game silhouette and add a fierce aura to her attire. “For a lot of the patterns and hard surface designs, we referenced Gothic furniture and architecture,” cites Skaalvik. “There is just something about dark wood and decorative patterns that looks haunting to me.”

Now that she’s decked out in a gothic new getup, Brigitte is ready to raise the stakes and join her fellow Halloween-ified heroes in the fight.

It’s time for another year of fear—Overwatch Halloween Terror is back! Until November 2, reap new rewards, unlock bewitching cosmetics, and defend Adlersbrunn from the devious Dr. Junkenstein. With more loot to obtain each week, can you survive the tricks to earn your treats?