Six Tails and a Whole Lot of Tools: Behind the Scenes of Shin-Ryeong D.Va 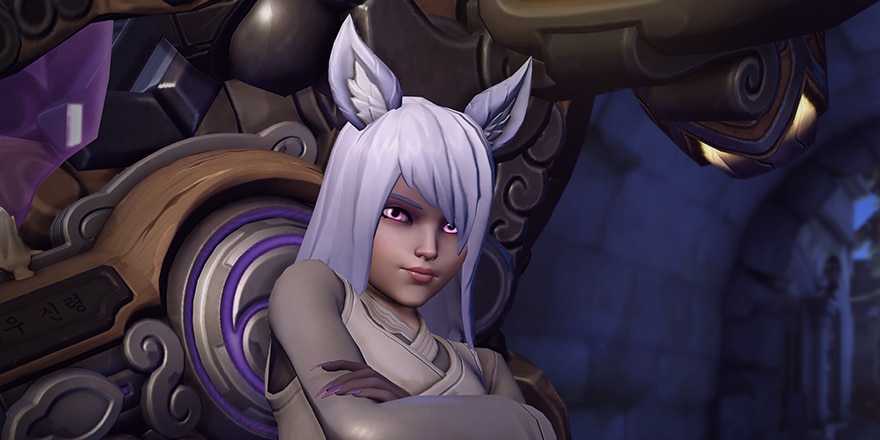 “We had to develop a few new tools to actually get this to work properly,” Albert Vital, one of the Overwatch team’s technical artists who worked on Shin-Ryeong D.Va, says. In the end, the work paid off: concept artist David Kang’s dream of an untamed fox-girl caught mid-transformation was fully realized by the Overwatch art team in 3D, complete with tails that trail behind her mech-less form while she scampers around the boundaries of teamfights.

Shin-Ryeong D.Va’s pilot form isn’t the only star of this Halloween Terror show. She rides in spooky style, her temple-mech accented by tiny details like guttering candles on her fusion cannons, stone lanterns for boosters, and long strips of fabric that flutter ominously behind her as she hunts for her next kill.

Read on as Vital and Kang share more about the creation of D.Va’s fiercest skin yet.

How did you get started in the industry? What’s your day-to-day like?

Albert Vital: I got started in the industry by jumping into an intense 2-year school for computer animation. I didn’t know anything about art or computers and just needed to go from zero to 100 quickly, and college helped get me there. My day-to-day is largely skinning and simulating characters; I come in, look at amazing character models, and try and figure out how to best bring them to life.

David Kang: Growing up I always had a dream of either working for Disney/Pixar or Blizzard. I loved watching Disney films and StarCraft was my first PC game growing up. My usual tasks include coming up with skin ideations and sketches, taking the successful sketches to their final stages, and managing concept art outsourcing.

How does your artistic approach differ from skin to skin?

Vital: It really depends on the skin and its animation set. I have to consider the life this character is living and how the skins will coexist with this already animated character.

Kang: Every skin is definitely tackled differently. I try to figure out what makes the skin stand out compared to previous skins. I also try to take the theme of the skin to the extreme within gameplay limits.

What were your roles in the creation of this skin? Can you walk us through what you do during the skin creation process, from the beginning to when you hand it off to the next artist involved?

Kang: I was responsible for creating the loose ideation sketch for the pitch. Once the sketch for each skin is approved, I take the sketch and render it further into a finished state by designing and drawing the front and back views of both D.Va and her mech. Then, I handle the same process for all of D.Va's weapons. Once the design is finished, I pass it on to our team’s 3D artists to model. 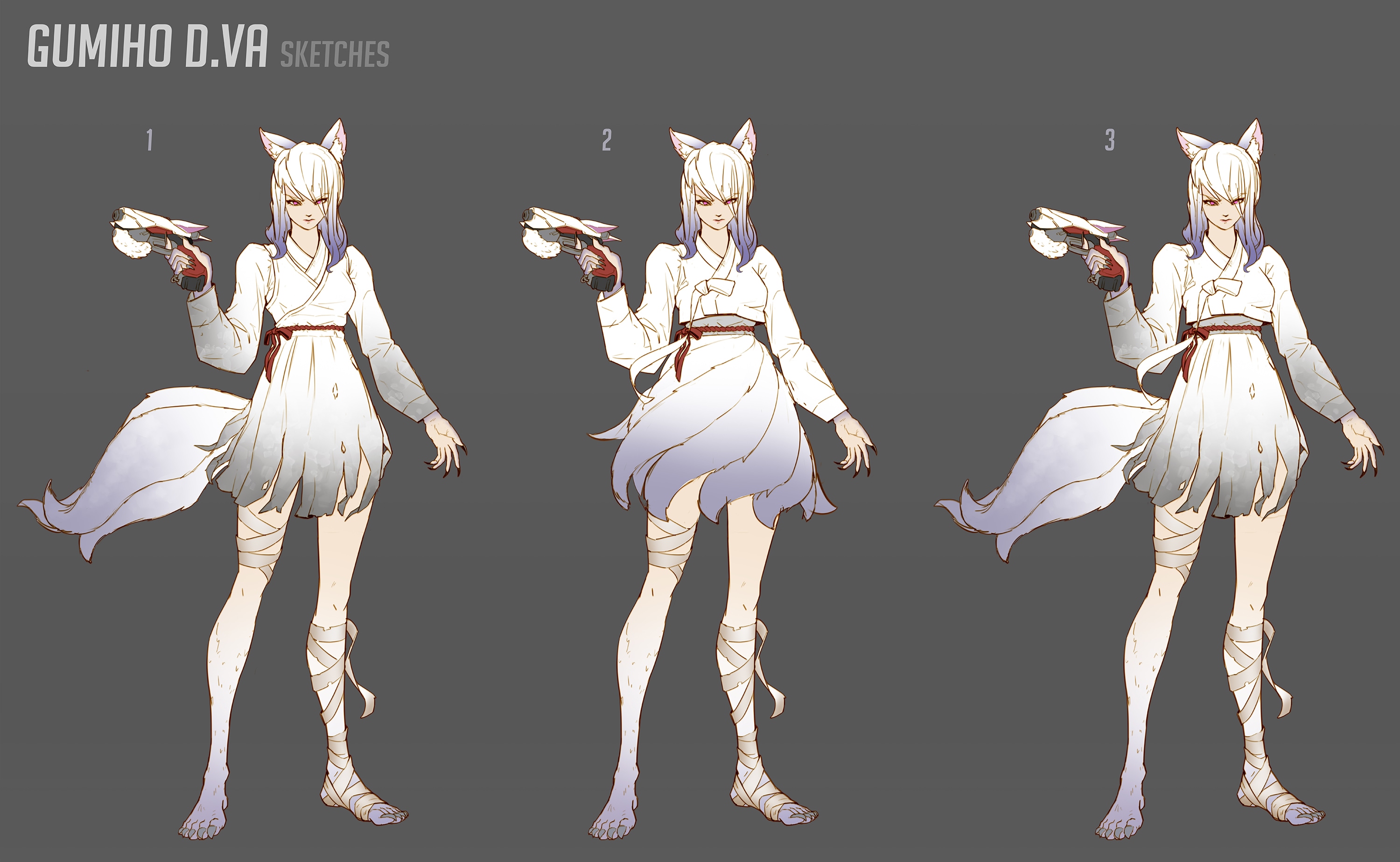 Vital: I was a technical artist for the skin. From when I saw the character initially and was briefed on what we needed to do to get this skin to work, I knew a lot of hands were going to go into this. I spoke to the concept, modeling, animation, and tools teams to set expectations and start to work on our goals. 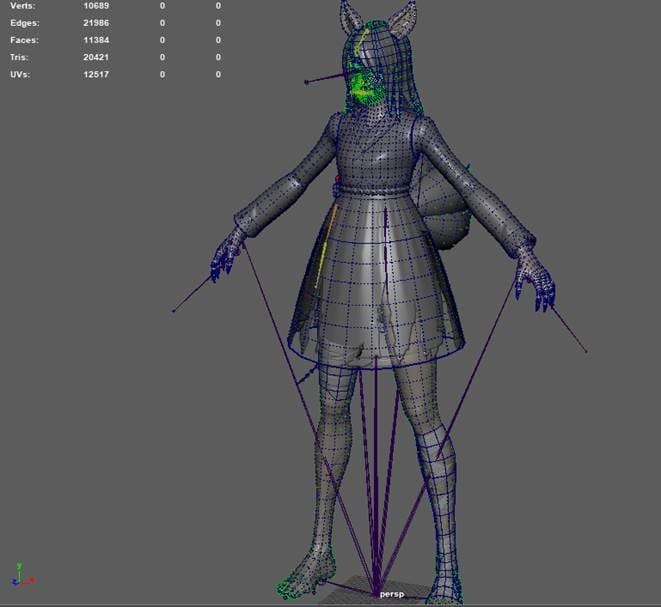 What’s your favorite little detail on this skin? Anything someone might not notice at first glance?

Vital: The obvious answer is the tails, but I really enjoy the whole story of the skin. David Kang really came through. He designed a killer look for D.Va herself, then he transformed her mech to resemble a temple.

Kang: My favorite details on this skin are D.Va's hands and feet. Other games that have characters or skins that are inspired by the nine-tailed fox myth are usually very princess-like and pretty, but we decided to try a take on the dark side of the theme and designed her mid-transformation. She is injured and vulnerable. She needs to transform to unleash her hidden power. Her hands and feet are just beginning to turn into her true form—a deadly fox.

What’s the most daunting part of creating a skin for D.Va?

Kang: We try to put in the same amount of hard work and attention to every skin we do. The daunting part is that D.Va needs a design for two characters: the mech and the pilot. She also needs a weapon for each, so that’s four different parts for one hero.

How did you settle on the fox spirit theme for D.Va? What about the mythology resonates with her character?

Kang: For skins related to Korea, we reach out to our Blizzard office located there. They always have great suggestions and insight into how we can best represent Korean culture. These skin ideas are usually used for the Lunar event, but I thought the ghost fox theme was a great fit for Halloween. The idea that D.va is very beautiful but can also be deadly in battle was something that I thought resonated with the mythological character. The spirit fox is known for her undeniable beauty; her dangerous side is only realized when it is too late.

Why did you choose the haunted temple design for her mech?

Kang: The haunted temple is a well-known element in the Korean horror stories. Being that the skin’s theme is mythological in nature, I thought that a temple fit the character. A lot of cool details come with the haunted temple idea: the burning candles, long fabric hangings, wooden blocks with Korean text describing the mythological character, and the eerie glow spilling out of the temple.

Vital: Simulating the tails was the most difficult, because they’re actually a hybrid simulation-animation. The animator dictates the broad action and the simulation (the visualization of the action that responds to the way a character moves) rides on top of that. The most fun part? Final polish. I spent so much time with this image of how cool this could look in my head. I enjoyed the final stages of the process, where I was able to see the D.Va alive and with the finishing touches put on her. 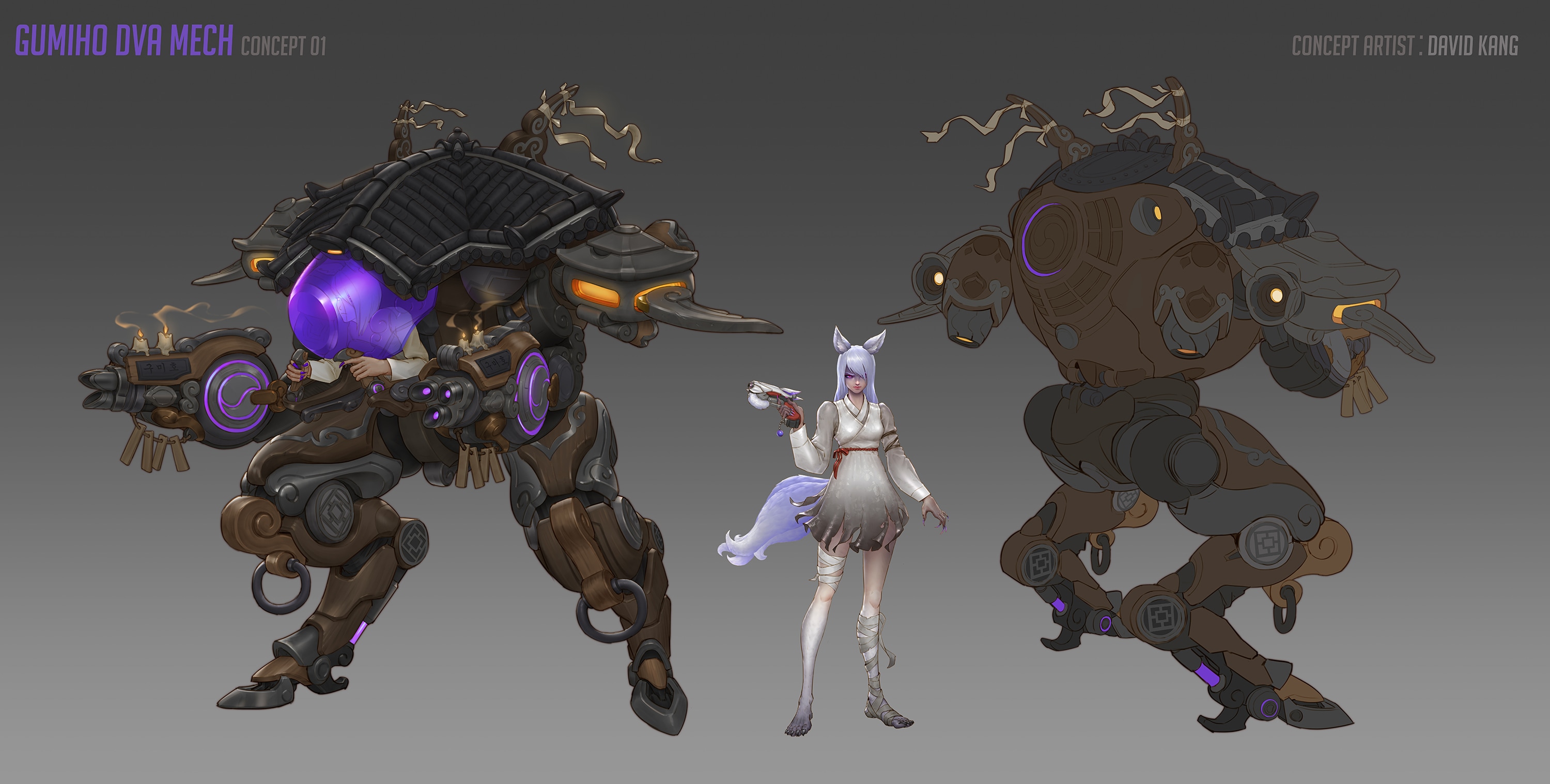 What’s your dream Halloween-themed skin that you’d like to make for an Overwatch character?

Vital: I would love a spider-themed Hammond. I’m a huge Wrecking Ball player and would love to see an Overwatch-style arachnid skin for him.

Kang: My dream Halloween skin is an evil and dark Mercy skin! She's DEATH but instead of killing you, she brings you back to life. I guess she'd be called LIFE.

How do you envision a fight between Shin-Ryeong D.Va and Classic D.Va playing out?

Vital: I would imagine it would be a quick fight. Shin-Ryeong D.Va has the power of a spirit!

Kang: They both have their advantages but the original always wins in my book!

What do you hope players will enjoy most about this skin?

Vital: I hope they have a slight bit of excitement in place of dread when D.Va’s mech gets destroyed, knowing that they’ll get to run around as a fox spirit and see her tails in action. Or that, when they pop her ultimate, those few seconds are spent half waiting to see how many people you kill and half enjoying the pilot form of her skin.

Kang: I hope the skin helps immerse players in the holiday!

Celebrate this frightful season with D.Va’s new Shin-Ryeong skin and more, because Overwatch Halloween Terror is back! We’re commemorating this horrific holiday with chilling new cosmetics, weekly rewards, and some spooky spins on Junkenstein’s Revenge, the action-packed co-op brawl.