Dive Into the Overwatch Summer Games With Concept Artists

You’re at the beach, sprawled out on a tastefully patterned towel on the postcard-perfect Mediterranean beachfront in Ilios. The sea breeze softly whispers by, gentle gusts complemented by the song of waves breaking on the shore. It’s perfect. It’s summer paradise.

Your reverie is shattered by seven screamed syllables. “No surfing in the swim zone!” shouts what you can only assume is a lifeguard. You hear the sound of torrential water, akin to twin fire hoses being sprayed furiously at a sand dune. Curious, you glance in the direction of this disturbance to your bliss, only to see. . . the lifeguard? Flying through the air toward a wayward surfboarder caught up by the tide? With a water jetpack?

A perfect marriage of futuristic lifeguard style with a hydrosports-inspired water jetpack in place of her combat suit, Lifeguard Pharah is just one of the eight new visions crafted by the Overwatch team’s skin concept artists for the 2020 Overwatch Summer Games. Each year, team members put their heads together to create skins for players to rock while they have fun in the Overwatch sun. We caught up with concept artists Kejun Wang and Daryl Tan, the minds behind Feskarn Brigitte and Lifeguard Pharah, to discuss their design processes and how they came up with two of this year’s hot new Overwatch Summer Games skins.

What influences you? How did you end up in game development?

Kejun Wang: I grew up watching Dragon Ball and other Japanese anime and spent a lot of my class time filling out textbooks with drawings inspired by those shows. When I got to high school, I played a ton of Blizzard games in my first year of college including the original StarCraft, Diablo and Diablo II, and World of Warcraft. While I was playing World of Warcraft, I used to go to a Chinese forum called the National Geography of Azeroth, where I found a fan art section. It was mind-blowing for me to discover that people could draw and paint digitally with a tablet. I purchased a cheap tablet and started to create my first piece of World of Warcraft fanart. As I learned more about the digital art world, concept art caught my attention. I realized I wanted to spend the rest of my life pursuing a career in concept art, which eventually brought me to the United States to study and work.

Daryl Tan: I've been hooked on video games since I was a kid, to my mom's dismay, so I knew growing up that I wanted to be involved in making games. I've also always loved drawing, so being a concept artist was a dream job for me growing up. After college, I worked in mobile game development for a couple of years before joining the Overwatch team here at Blizzard. 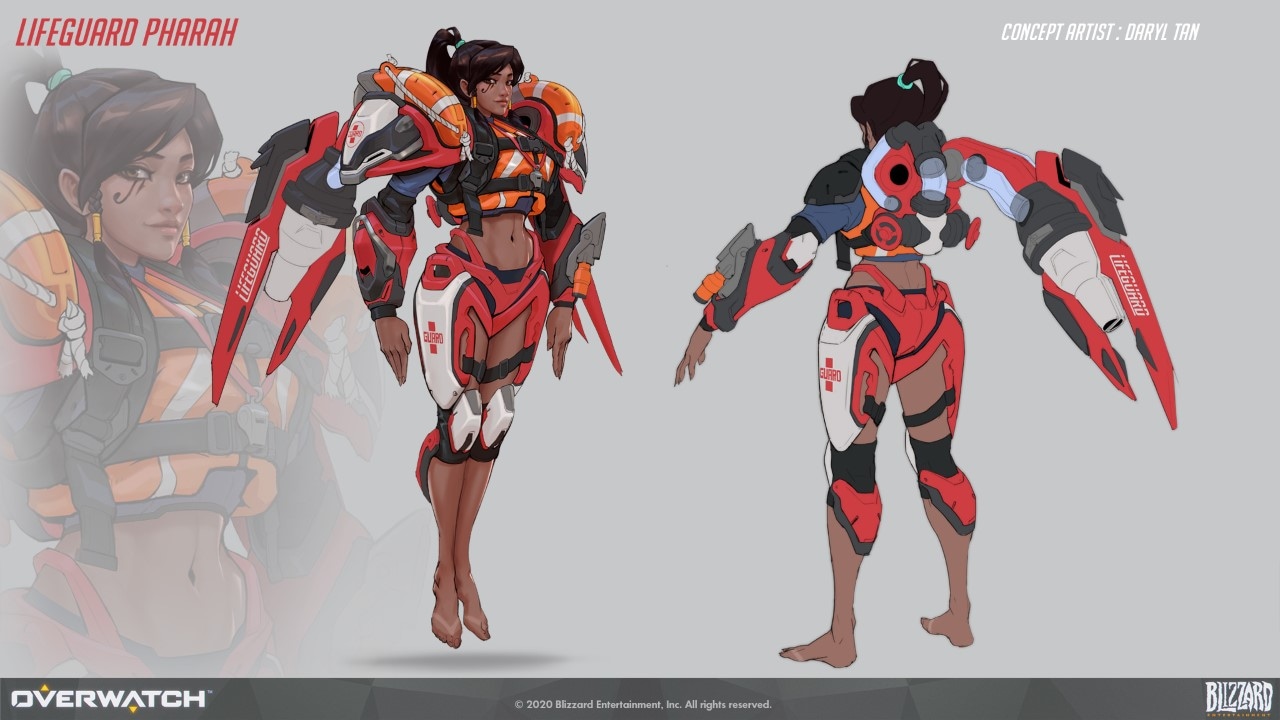 What’s your favorite thing about working on the Overwatch team and concepting skins like these?

Wang: One of my favorite things about working here is the obsession with quality. We speak with team members from other disciplines on a daily basis to make sure things are on the right track and quality doesn't get compromised. The most fun thing about concepting Overwatch skins is that I am able to imagine what it would be like if a character lived in an alternate world with a different occupation. I also get to do a lot of research about different subject matter while designing skins, like “what’s the most common fish in the Baltic Sea?” and “do Karate practitioners wear shoes?” There’s always something fresh for me to discover.

Tan: I love taking themes and ideas that range from immediately recognizable to really abstract and applying them to our beloved Overwatch heroes. It's equal parts challenging and rewarding. We get a lot of autonomy and creative freedom at Blizzard, so designing skins is always a great experience.

What was the most fun or interesting part of the design process?

Wang: One thing I remember was designing Feskarn Brigitte’s hat. I tried a bunch of different types of hats and a lot of them just didn’t seem right to me. I remember sketching out some variations and showing them to the assistant art director. He suggested a trucker hat. I loved what he said and the skin turned out really good with that hat. I also talked to one of our producers who has a lot of fishing experience and learned that people sometimes put spare fishing hooks on their hats, which ended up becoming an interesting detail on Brigitte’s own hat.

Tan: I love the overall process of it. It's a slow burn, really. From the excitement of the idea and forming a really cool image in your head, to visual problem solving, to all of the cooperation with amazing artists of all disciplines, and finally seeing the finished skin in game. Seeing the skin really develop after handing off the concept is particularly rewarding. The overall feel of the skin that they were able to capture from the concept art exceeded my expectations. Even after I handed off the concept, I still had my reservations about the skin due to technical limitations of how we could realize Pharah's organic joints that we normally don’t see because of her suit, and I think they did an amazing job with that. The water effects they made in the tubes on her jetpack were also exciting to see! 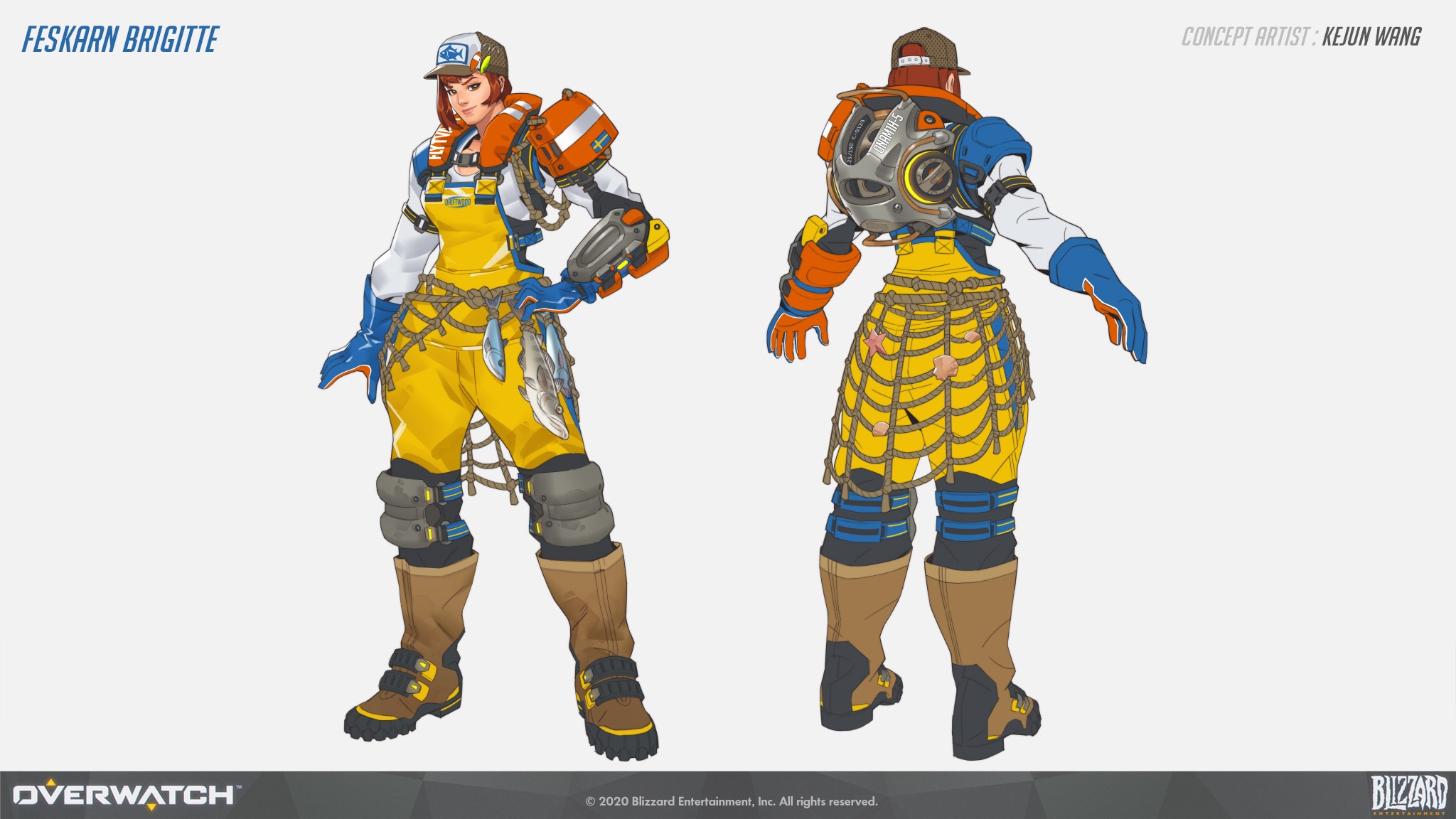 How did you decide on each theme? What inspired you to create the skins for these specific characters?

Wang: Usually, I review different themes to figure out which ones will work for certain characters. If we take, for example, the Overwatch Summer Games event, I will lay down pictures of different sports or summer activities and see which one of those has recognizable aspects. Then I will create some ideation sketches to see if any of those themes have the potential to work for the character we pick. For instance, if we are designing a skin for a more armored character like Brigitte, maybe a swimsuit won’t work very well.

Tan: We decide on each theme based on a few things: how engaging and strong the theme is, how visually appealing the end result could be, and how appropriate the theme is for that particular hero. For Pharah, we were initially inspired by the water pressure jetpacks in hydro sports, which we thought would be a strong visual for her. Layering the lifeguard theme on top of that tied it all together, as it was a great fit for her character and added a lot of interesting visual elements for us to play with.

What about these skins do you hope will resonate most with players?

Wang: Hopefully these skins can bring some outdoor summer vibes to those who are not able to go outside and enjoy the weather during this time.

Tan: The themes for the Overwatch Summer Games skins are always very lighthearted, casual, and fun, and I hope that these skins can bring that to our players.

You can supervise the battlefield as Lifeguard Pharah and reel in some big ones as Feskarn Brigitte now, because the Overwatch Summer Games are back! It’s time to suit up and dive into a sea of content—unlock cosmetics, earn weekly rewards by winning games, and kick it with a new twist on Lúcioball now through August 25.