So Many Masks, So Little Time: A Look at Face Changer Sombra

An actor, clothed in vibrant, intricately embellished garb, moves synchronously with the beat of percussion-heavy music. A drumbeat and fan-flutter later, they don a crimson face that scowls at the audience; with a wave of their hand, that guise is gone, replaced by a pale, smirking mask, the edges of its lips quirked upwards in an uncanny jester’s grin.

How do they accomplish such feats of suspenseful fun and sleight-of-hand?

Bian Lian, known colloquially in the West as “face changing,” originated in the Qing Dynasty during the seventeeth century as a subgenre of the Sichuan opera. The art used to be simple, with performers only changing a few faces per performance; now, most professionals can swap through more than eighteen masks in a single show. With only six at her disposal, Sombra still has a way to go before she can truly be considered a mask-switching master.

Though in her present incarnation she glitches through visages as easily as she’s able to infiltrate organizations, allowing Sombra to don more than two faces was a feat of design and implementation for the team behind her masked magic.

While Sichuan opera performers can change from one face to another with a head cant, hand wave, or snap of their fan, Sombra is able to change hers in a way much more befitting of her high-tech vibe. One moment, she might be sporting the red, black, and gold visage of Journey to the West’s legendary monkey king, Sun Wukong; a split second and a facial glitch later, she’ll be donning a mask of her own signature purple calavera motif, rendered in the elegantly embellished Sichuan opera style. “There’s an air of playfulness and elegance about Sombra, and combined with her stealthy, glitchy abilities, we felt she would bring out the face-changing theme very well,” says Daryl Tan, the skin’s concept artist. As a hacker hiding her true identity, swapping façades as needed is something Sombra is well-acquainted with.

As traditional Bian Lian performance involves rapid, at-will face-switching, the team were faced with a decision to make: what was the right cadence for the changing of Sombra’s masks (and, accordingly, the handy little mask-tracking ticker on the barrel of her gun)? “We were going to have it only change between extreme animations, like going in and out of stealth or when she uses her ultimate ability,” says Gotch. “Since it wasn’t noticeable in most aspects of the game, we went with the option of [the mask] changing every so often.”

In total, Sombra cycles through six unique masks—a feature cited by Lead Character Outsource Supervisor John Gotch as the most difficult part of creating the skin. “We had to figure out a way to have the ability to swap the masks in game, depending on when we wanted them to change,” says Gotch. “After we had the 3D model created, we took the variety of faces that had been concepted by Daryl, implemented the 2D art into the 3D models, and then worked with the Effects team to have it hooked up in game. When we started to implement [the skin] into the engine, we only started with two masks. This was to test our tech and make sure the option we ended up with gave players the ability to see all the variations of the masks.”

The result of this foray into uncharted technological waters? A dynamic, culturally rich concept realized in futuristic form. Sombra’s collection of masks is accented by her bold, elaborately patterned outfit, an ensemble true to the Sichuan opera’s dazzling costumes that still retains a style unique to Overwatch. “Visual integration was a matter of taking the striking graphics of the opera and giving it the [game’s] aesthetic treatment,” says Tan. To keep these skins faithful to what they’re representing, Tan notes that the team reaches out to people native to that culture for their input. “Many times, they’re just a Nerf dart away, as [Blizzard] itself is a huge culture hub. Then, with a better understanding of the theme and how it would work with our characters, we work in the Overwatch aesthetic. We then reach out again to our consultants and global partners for feedback to make sure we’re hitting the right notes.”

Past Lunar New Year skins have undergone the same treatment and integration, melding vibrant myths and evocative imagery with the world of Overwatch.

This year, the team leaned away from previous myth and novel-based themes and opted to pursue an entirely different thematic for this year’s two legendary Chinese skins: opera. “Chinese opera is visually distinct and full of culture, and the team felt it was a great theme to explore for our skins,” explains Tan. “It’s a graphically rich theme with a lot of opportunity for interesting visuals, and it was fun exploring how we could combine that with our characters.”

It’s also a theme with sentimental significance for both Gotch and Tan.

Gotch recalls a trip he took to the Sichuan province of China with his wife last year. “We were just walking down one of the busier streets when my mother-in-law took us into this tiny little tea café that also had an opera showing,” he remembers. “One of the shows they were putting on included face changing. The overall experience of the opera was definitely nothing I was familiar with since it was very different from [Western] opera, but the face changing part was pretty amazing. It was really fun to watch how many different faces they were able to switch between and how fast it was done.” Serendipitously, just a few months later, the Overwatch team circulated initial ideas for the Lunar New Year, and the first iteration of Face Changer Sombra was concepted. Excited by the prospect, Gotch knew that the final model had to swap between faces. “At that point, I went to [Daryl Tan] directly and told him we would make this happen since, without the masks changing, it wouldn’t have had the essence of the culture. He totally agreed and was already hoping we could make the masks change.”

For Tan, concepting the opera-themed skin brought back fond memories of his youth in Singapore. “When I was 14, my school staged a Beijing opera performance, which I was involved in,” he recalls. “They brought in a professional opera troupe to train us, and I got to experience everything from the elaborate make-up to the beautiful costumes. I played the villain who went into town with his goons to kidnap village girls and got wrecked by a hero in white played by my best friend. Learning the moves and coordinating the play took a few months of work, but it was a really rewarding experience.”

Like Tan, Sombra is no stranger to playing the role of a villain, when necessary. Though some of her acquaintances might consider her two-faced, in this skin she shows her true, many-faced nature.  “The opera’s face changing was a really strong theme we wanted to incorporate into our skin design, and we felt it fit Sombra like a glove,” says Tan. For a character who assumed the guise of a false identity at a young age, the six masks Sombra dons in her new skin are but a handful more to add to her collection. Which is her true face? You’ll never know. 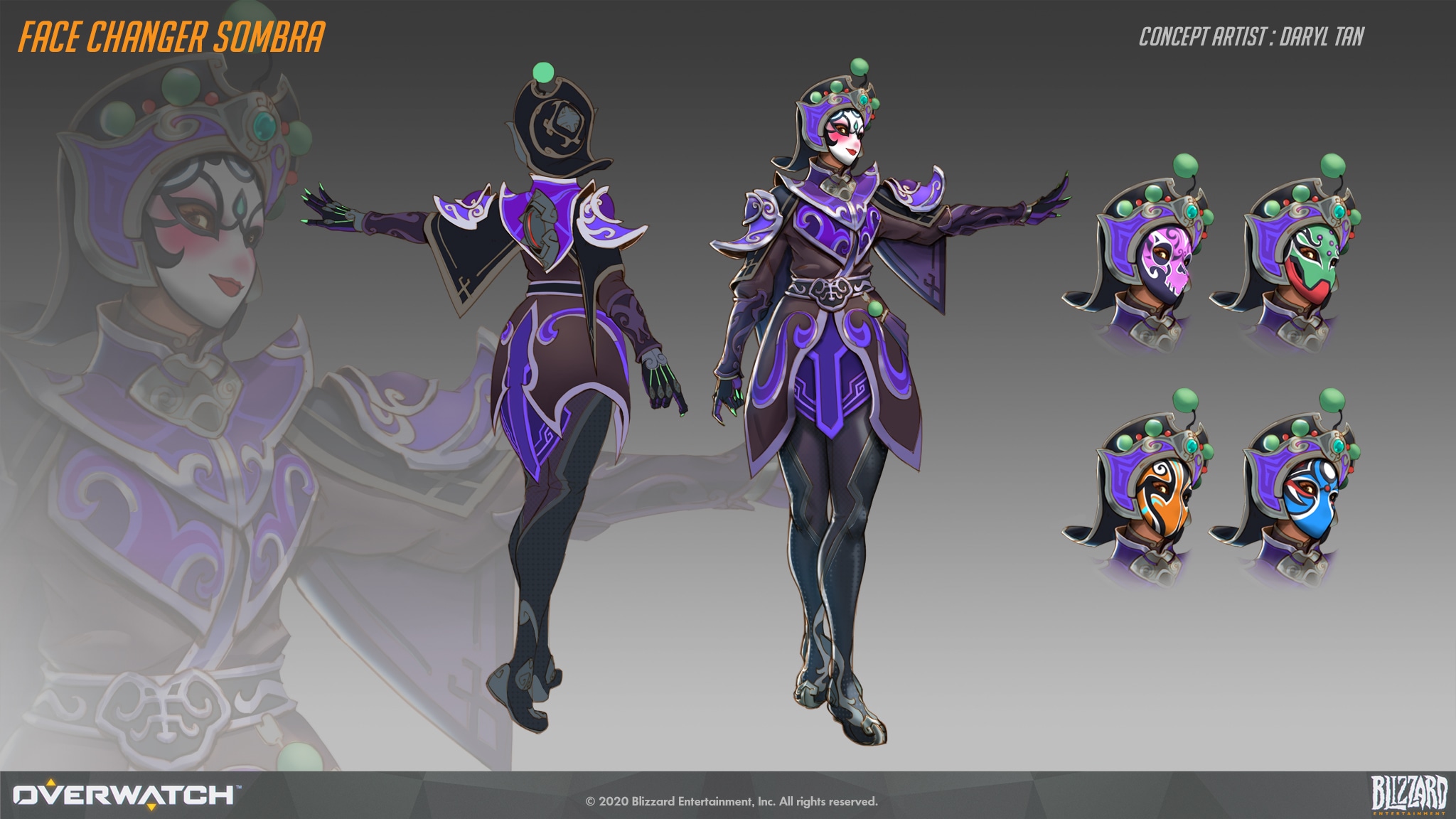 Fortune Smiles Upon You

Faze your enemies as Face Changer Sombra now in Overwatch’s Year of the Rat celebration. Through February 5, ring in the 2020 Lunar New Year with more seasonal items, exciting weekly challenges and rewards, and the new brawl, Capture the Flag Blitz.