Fly into action and take up the mantle of the Valkyrie in Mercy’s Recall Challenge! Bring the new Overwatch short story, “Valkyrie” to life with story-inspired content available to unlock for a limited time.

From now until December 2, players will be able to earn a player icon, 8 sprays, and a legendary Dr. Ziegler Mercy skin, for a total of 10 new rewards.

We’re bringing the excitement of the action-packed short story into Overwatch by making some of the special content in the story available to unlock in-game. Wins in Quick Play, Competitive Play, or Arcade will all earn you a limited-time player icon, two sprays, and a new legendary skin: Dr. Ziegler!

These special Mercy’s Recall Challenge rewards are a bonus on top of your normal earnings for playing in the Arcade. 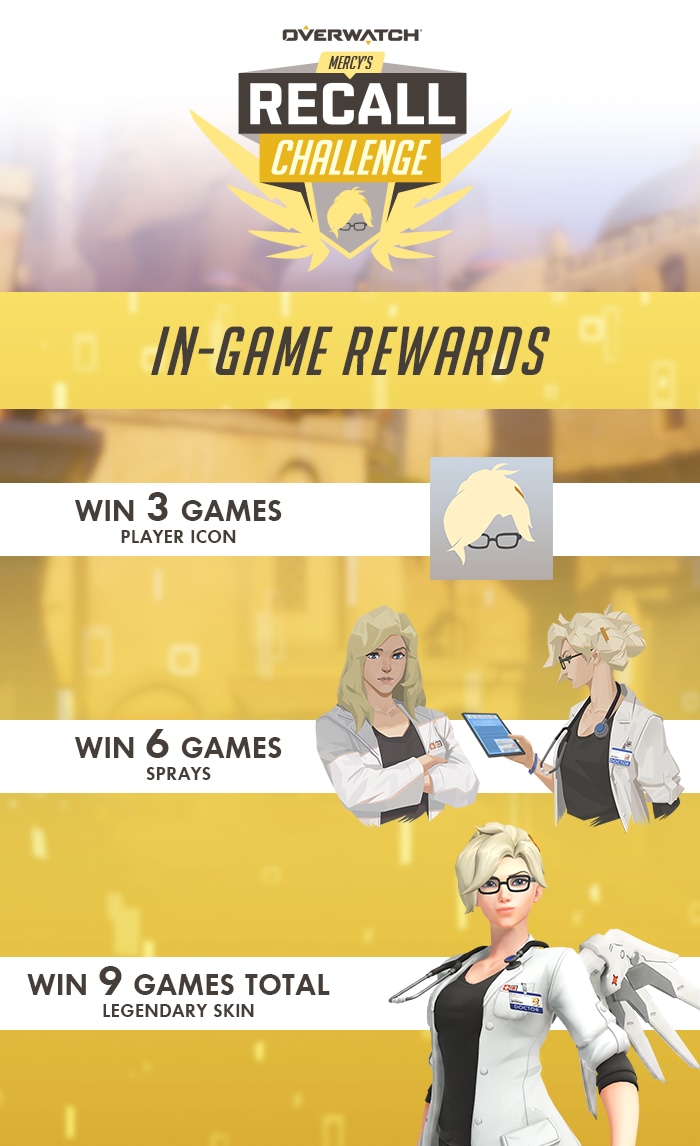 Unlock additional rewards by watching Twitch streamers before, during or after matches to unlock even more Mercy cosmetics – we’re bringing you more Twitch Drops every time you tune in to participating broadcasters through December 2 to earn six Mercy’s Recall Challenge sprays! 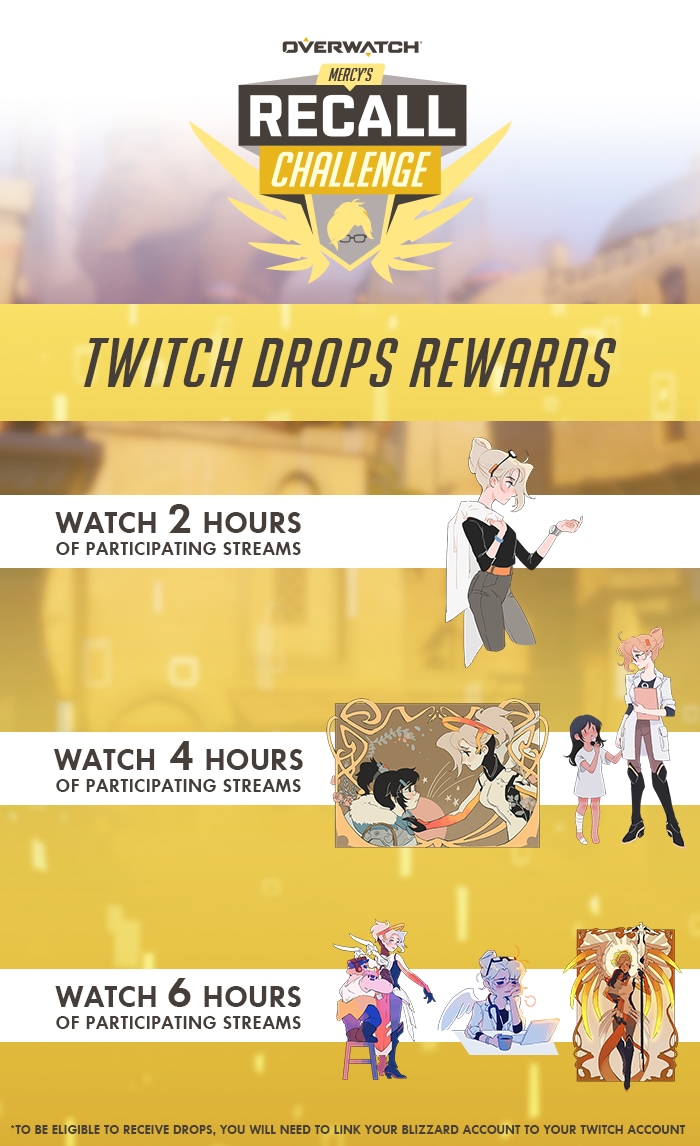 Mercy’s Recall Challenge Twitch Drops will be available November 12 – December 2 on all channels streaming in the Twitch Overwatch game category will be eligible for rewards.

We’ll be spotlighting specific channels containing additional opportunities for rewards! We’re partnering with Samsung to bring you giveaways on highlighted channels now through December 2. Tune in to one of our highlighted channel’s streams during the Mercy’s Recall Challenge event to have a chance to win a Samsung 970 EVO Plus NVMe SSD, Mercy Statue, and other Mercy swag. See the full list of participating channels below.

Following the end of Overwatch, Dr. Angela Ziegler attempted to escape her past and help those in need. It would only be a matter of time before she learns that her battle was not over. In “Valkyrie” by Michael Chu, Mercy regains her wings and begins to rebuild the future. 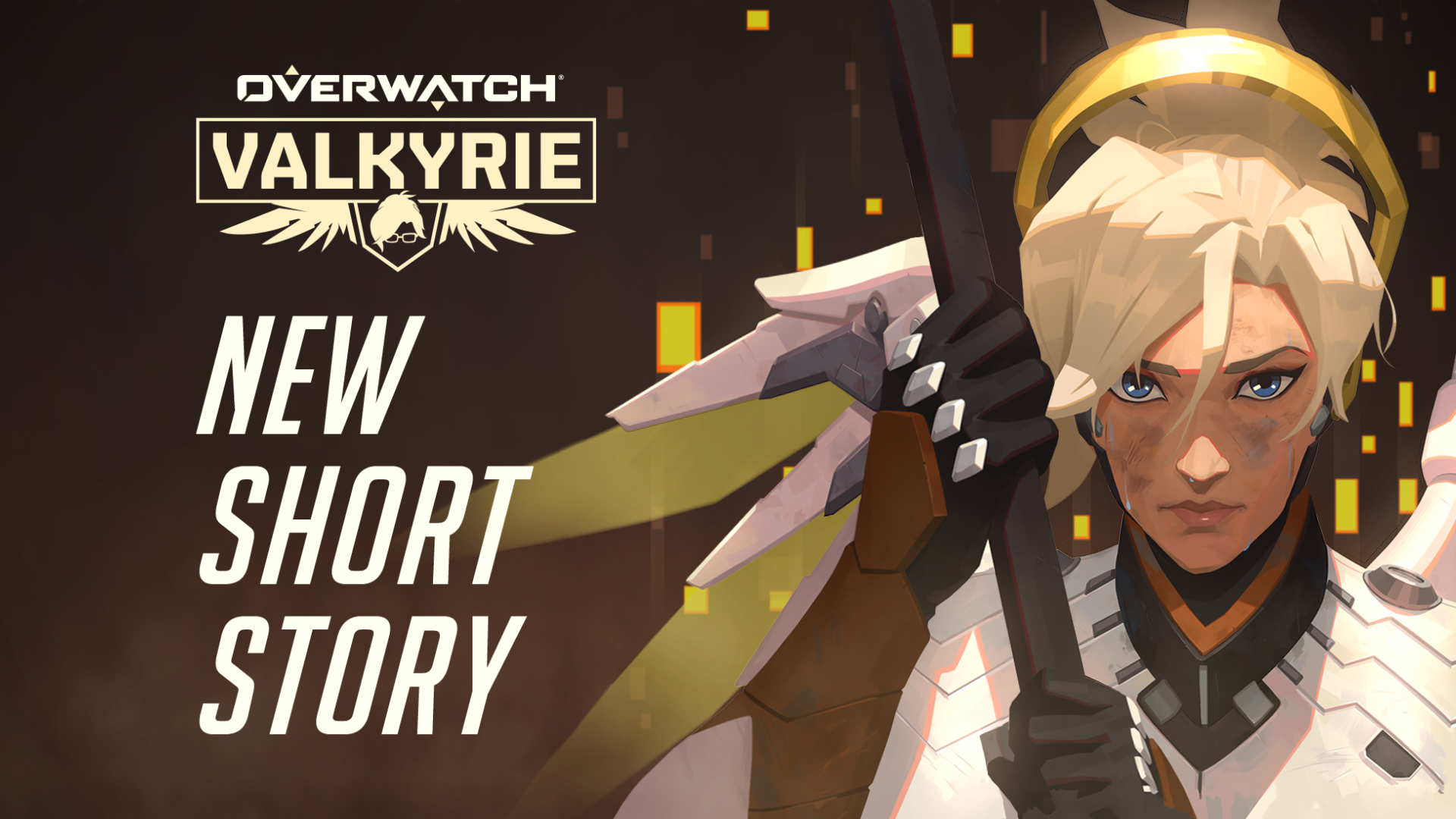 Embody the Valkyrie with Mercy’s Recall Challenge, now live in-game! Earn 9 wins and watch participating broadcaster channels so you can add 10 limited-time cosmetics to your collection.

Now get in there – this challenge takes flight on December 2!