Just before Overwatch: Winter Wonderland launched, six talented community artists helped us bring our holiday-inspired skins to life, each crafting a work of art in their own unique visual style. 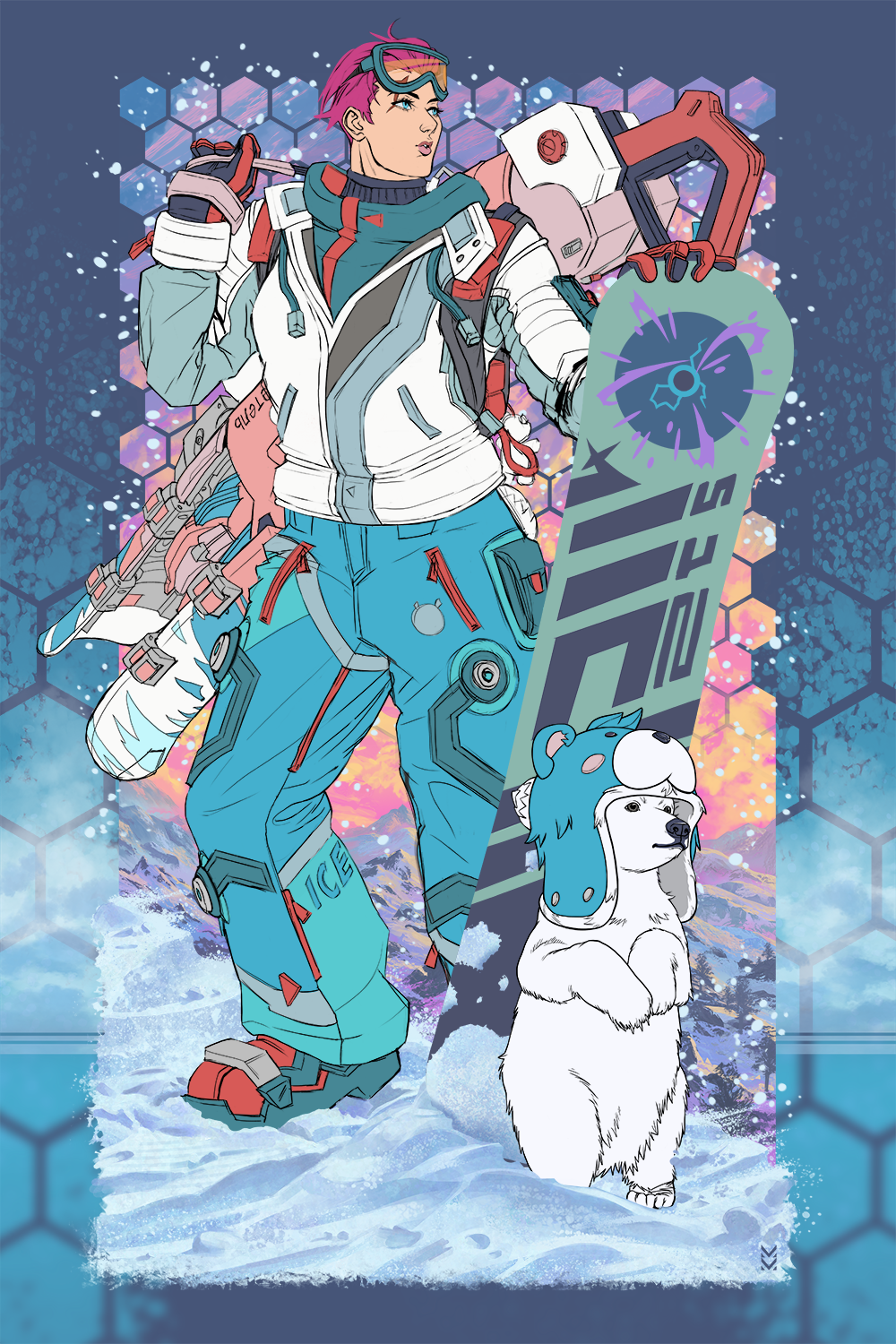 A freelance illustrator and designer in the film, advertising, and game industries, Michael Matsumoto enjoys creating art that that evokes a grand sense of storytelling and wonder. His taste in art is influenced by a lifetime fascination with fantasy and science fiction, as well as many late-19th and 20th century illustrators. When Matsumoto chose to paint Snowboarder Zarya, he was inspired by how the skin moves away from her classic militaristic look and shows a more relatable side of the character, while still maintaining her strength and beauty.

"[Zarya's] fascination with bears, which was always hinted at in her skins and voice lines, has finally, manifested into a fun, festive look, "Matsumoto told us. "It's become one of my favorite event skins for the tank hero!" 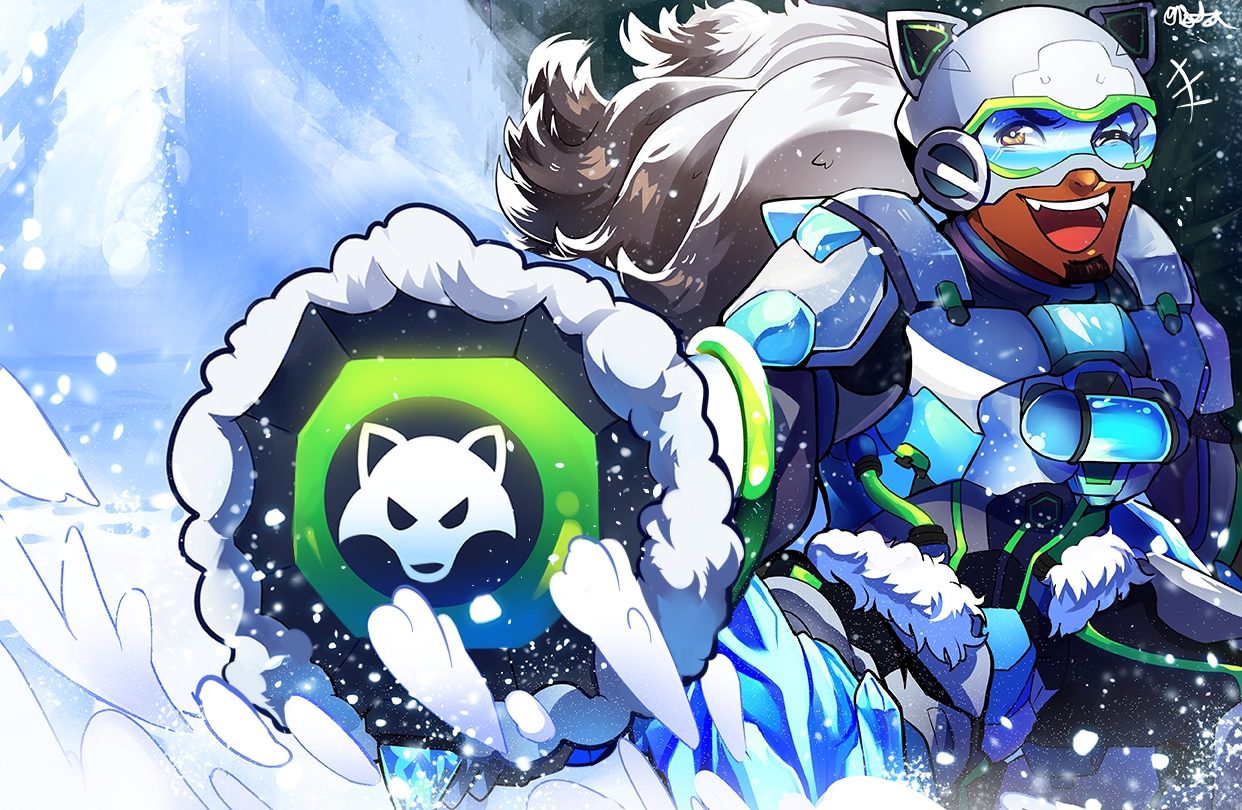 “I'm really happy I got to create a piece for Lúcio.  He's very fun to draw for me!” says OnstaMonsta, a US-based illustrator from the East Coast. Lúcio is her favorite hero, so selecting Winter Fox Lúcio was an easy choice.

“Working with this design meant making sure that not only all the details lined up correctly," she said, "but still looked fun and lively when incorporated into the pose and the rest of the illustration's elements.”

When not drawing, OnstaMonsta spends a lot of time playing Overwatch.

“Overwatch is not only an incredible game that I've bonded with a lot of friends over, old and new, but it has a colorful and diverse cast that I was immediately drawn to,” she said. “Since then, it's only gotten more and more charming and delightful with each new hero and set of amazing alternate skins.” 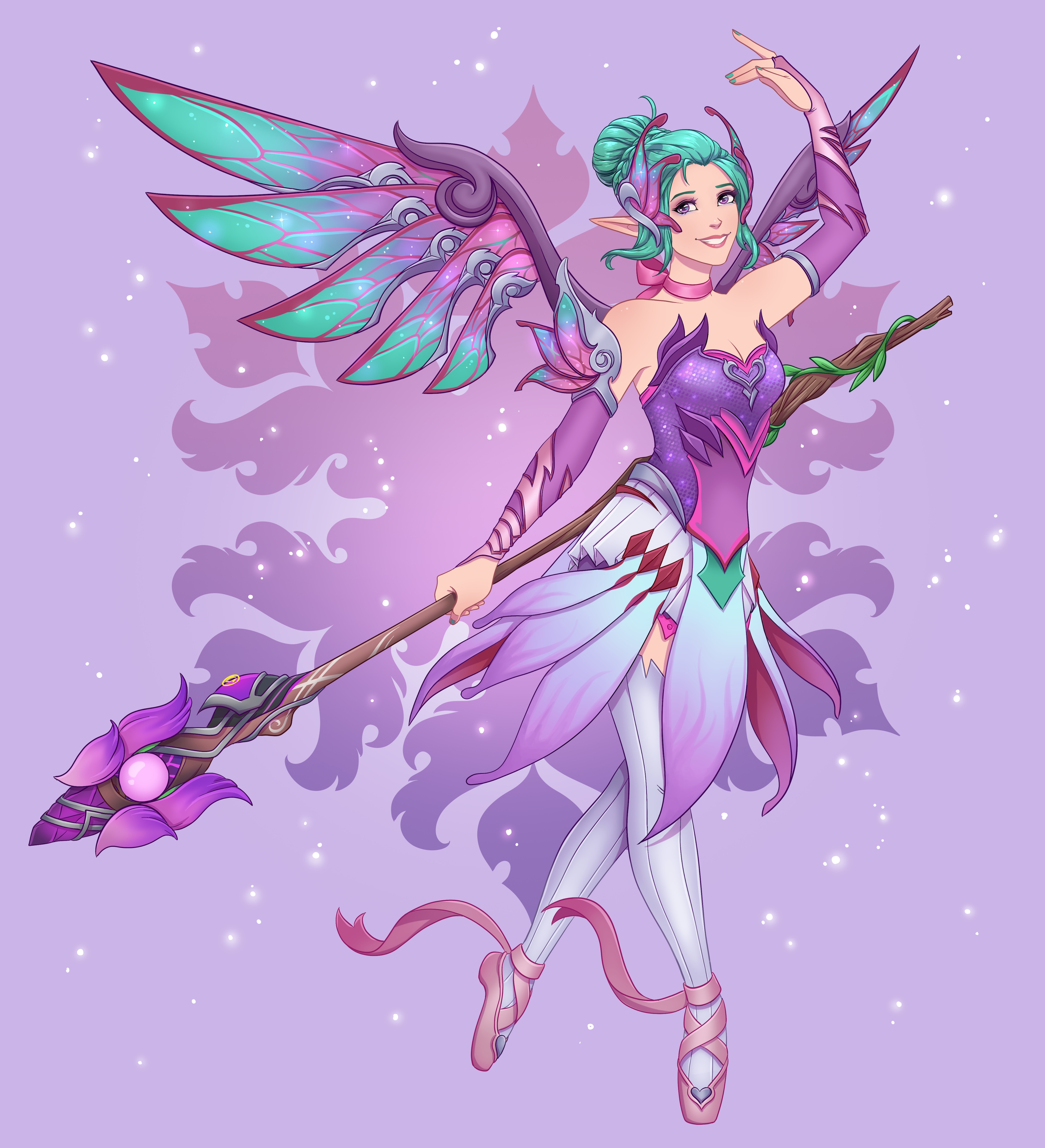 If you've ever seen Faebelina's artwork, you know that Sugar Plum Fairy Mercy was an obvious choice. The fairy aesthetic, the colors, and the overall mood of the skin made it a perfect fit.

“The wings caught my attention first,” she said. “The use of gradients and bits of sparkle throughout the design make it very intriguing. The hairstyle is very elegant, and her pixie ears really bring it all together!”

“I also really like the happy expression I gave her,” she continued. “I think it captures how happy I felt as I was drawing the piece.”

Beyond the gameplay, Faebelina finds a lot of inspiration from the world of Overwatch, “Overwatch is hope, teamwork, and persistence to me. It's rallying in the face of adversity, whether that's in the challenges the characters face in their stories or when you're pulling together as a team to win a tough match!” 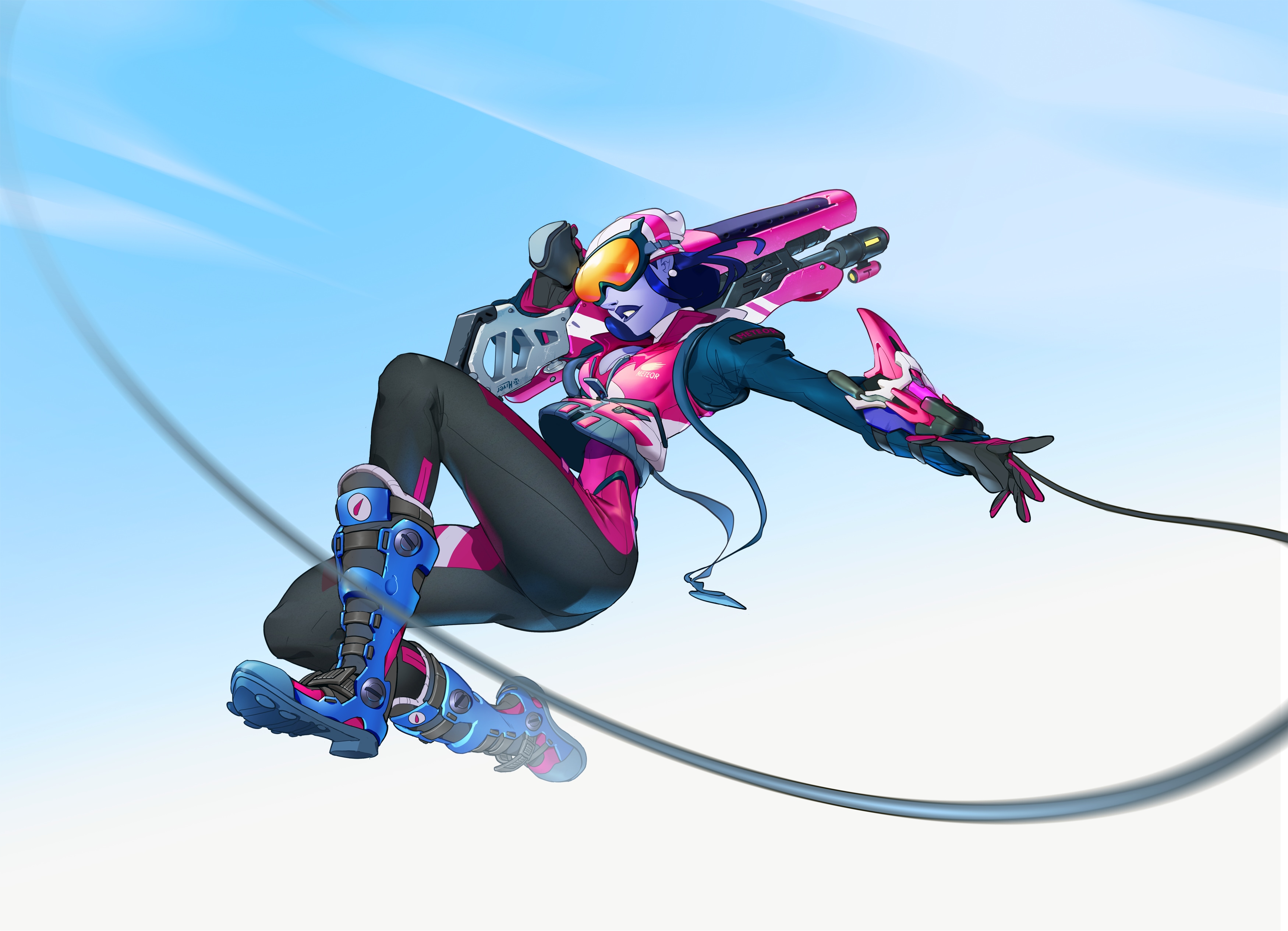 Dashiana is a 2D video game artist and animator who creates concept art for mobile games and works hard to emphasize the expressiveness of her characters. For Dashiana, Biathlon Widowmaker stood out thanks to her bright colors—a departure from Widowmaker’s classic appearance.

“I think my personal favorite things about this Biathlon Widowmaker piece are the colors and the ‘swinging into action’ motion of it all!" she said. "The grappling hook also sort of ties everything together and adds more of that fun ‘swoosh’ into the picture, and I’m happy I decided to include it.”

“And, you know, it’s nice to see that Amélie is able to take a day off to grapple in the Alps every now and then.” 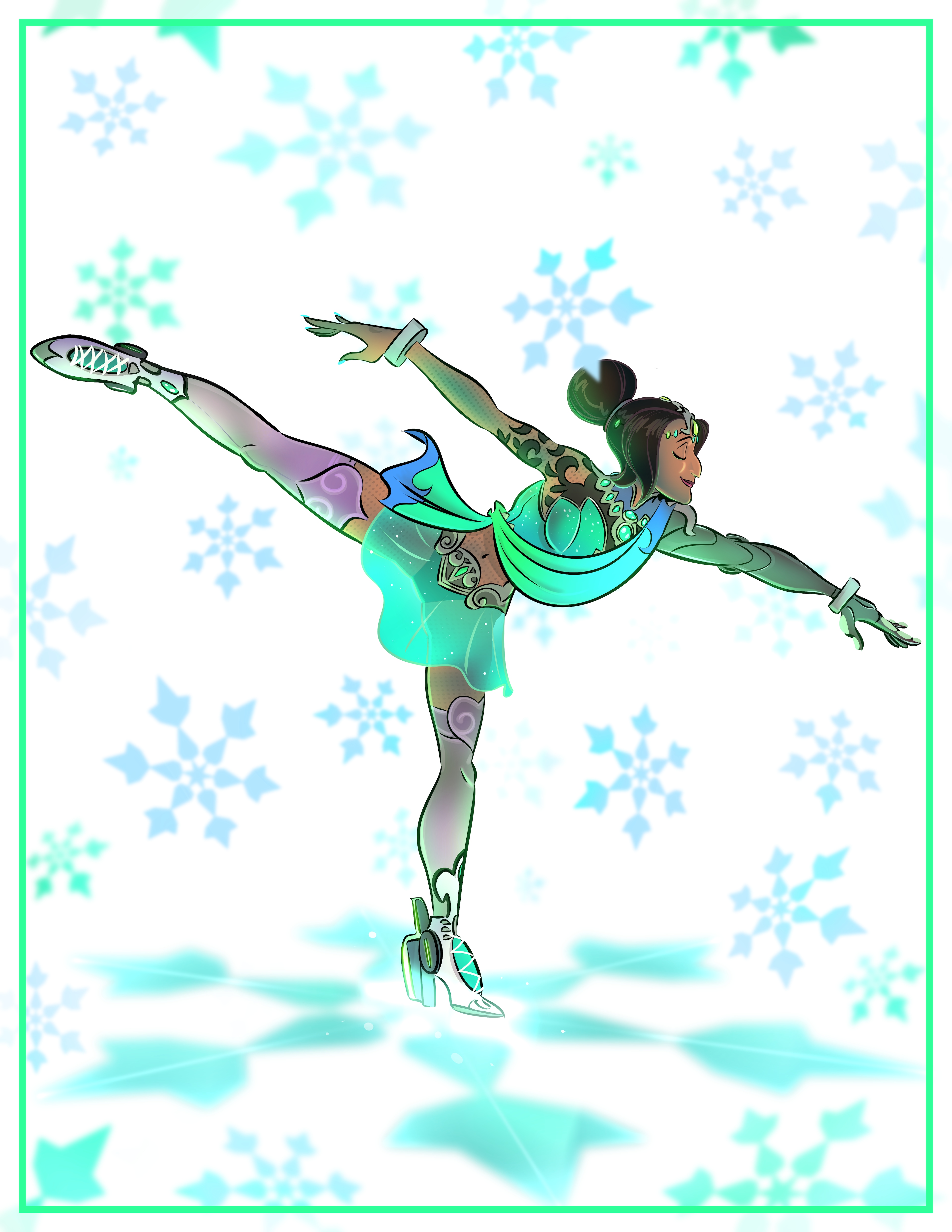 Cartoonist Mike Krahulik created the Penny Arcade webcomic with his friend Jerry Holkins over 20 years ago, and it spawned an empire that includes the PAX conventions around the world, the Child’s Play charity, and more. Since Symmetra’s one of Mike’s favorite heroes, it was a no-brainer.

Moving well-known characters from one context to another isn't an easy task, but Mike was up to the challenge. “Sometimes when you have limbs going off in all different directions the piece can look goofy,” he said. “I feel like Symmetra looks graceful here, which is really what I was going for.”

He plays Overwatch daily and even recently got his first team kill as Symmetra on Route 66. “Overwatch is a game that my entire family loves and that's really special,” he said. “It really was the first game that we all played together as a family, and still do.” 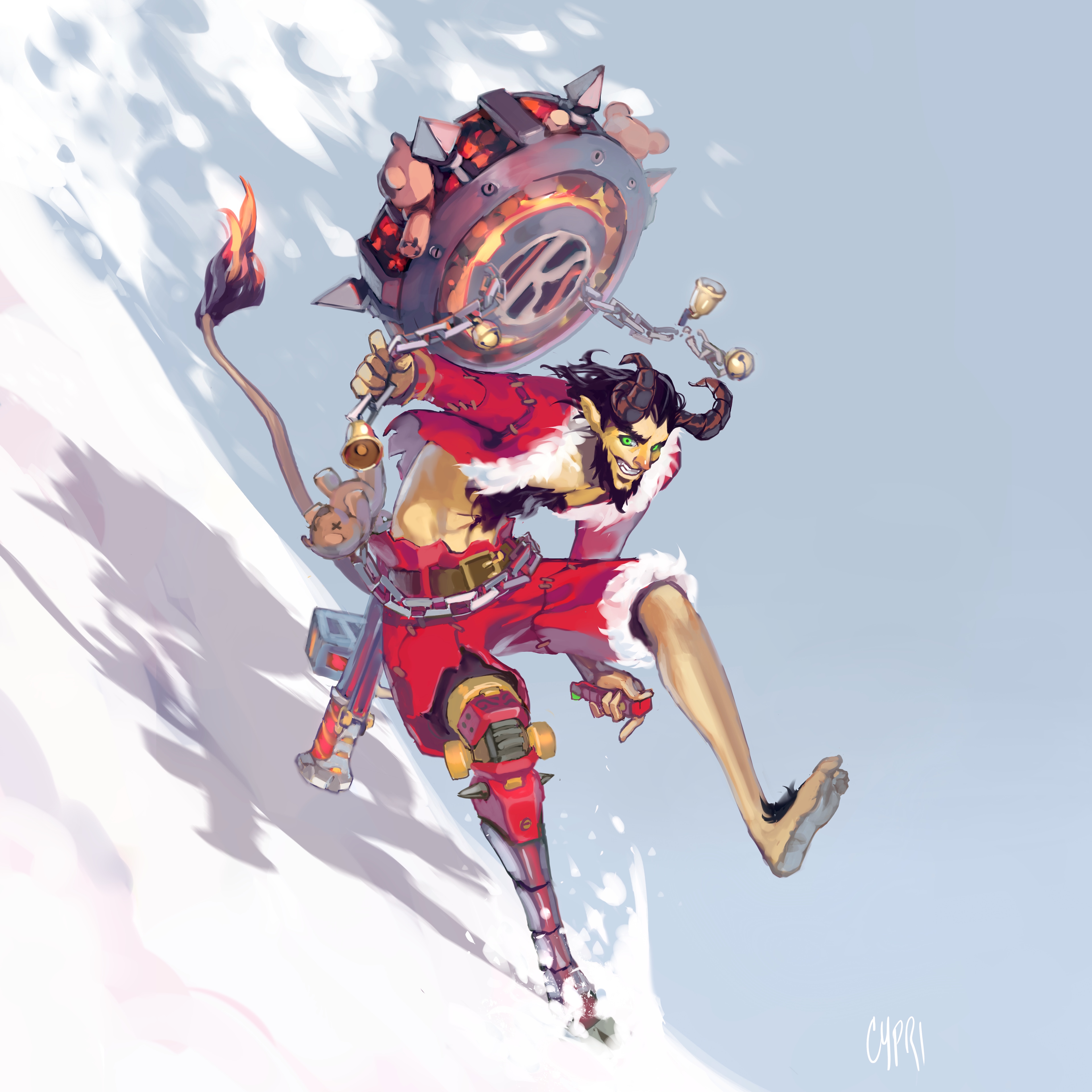 Fueled by a love of video games, Cypritree is a freelance illustrator who works to capture the essence of an individual moment.

“I love infusing a sense of movement and energy in my work, like you are viewing a moment in time and you can perhaps feel where the subject came from or where they are going,” she said.

For Cypritree, Junkrat's Krampus makes a lot of sense for the hero.

"Krampus Junkrat skin is such a great fit for the character because of his already devious nature! The skin has a lot of personality and detail that pays cultural homage to the traditional Krampus design.”

We’re so lucky to be able to work with such talented artists in the community. Feel free to share your fan art on Twitter and Facebook.