Last weekend in Katowice, Poland, South Korea and Canada joined China, France, Sweden, and Australia in the round-of-eight bracket for BlizzCon. This week, we fly to sunny Los Angeles, California, where Groups G and H will tussle for the final two remaining spots August 11–13.

Team USA heads up Group G, where they're up against Team Chinese Taipei, Team Brazil, and Team New Zealand. The home side is led by Adam "Adam" Eckel, captain of the popular Cloud9 team. He'll be hoping that any C9 spam in the chat is for encouragement as he steers an all-star squad that includes players who've performed at the top level in Overwatch Contenders Season Zero in North America.

Coming in hot for the Chinese Taipei national team is the entire roster of popular esports organization Flash Wolves. This team won Season 1 of the Overwatch Pacific Championship a few months back, beating out the roster of the Australian national team, who have already booked their spot to BlizzCon. Chinese Taipei will undoubtedly burn to prove their worthiness against the Australian squad once again by making it to BlizzCon themselves.

Another familiar roster entering the fray of Group G is Team Brazil, which is made up of the members of Brasil Gaming House. Although they have seen reasonable success in their home country, they are not well known internationally and will be looking to make a splash in Los Angeles.

Rounding out the group is Team New Zealand, formed from parts of four existing competitive rosters. New Zealand only just qualified for the World Cup Group Stage, ranked 30 out of 32, and will be eager to make their country proud. Nothing is more dangerous than a bunch of Kiwis with nothing to lose. 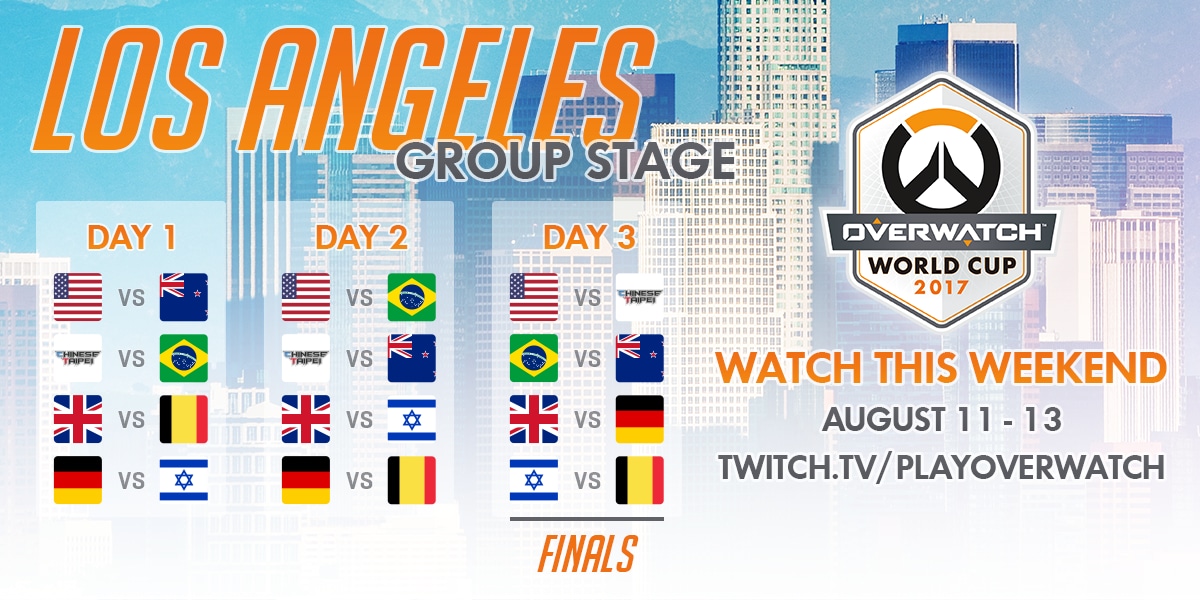 Group G's partner group, Group H, is made up of United Kingdom, Germany, Israel, and Belgium.

Team UK holds some familiar faces, with eUnited members Harrison "Kruise" Pond and Isaac "Boombox" Charles playing alongside ex-Ninjas With Attitude member Michael "MickeyA" Adams and current Ninjas With Attitude member Marcus "Realzx" Vining. The key for the United Kingdom national team will be whether or not they’ve managed to take their raw skill and convert it into effective team synergy.

Next, Team Germany, featuring former-EnVyUs-player-turned-Team-Liquid-coach Dennis "INTERNETHULK" Hawelka. Getting back into the player saddle, he'll be joined by a couple of members of Team expert and one of the Laser Kittenz. The German national team has a strong foundation - their success or failure will all come down to their execution.

Team Israel is coming into Group H with the full roster of Zengaming eSports. They finished in the top 16 of both Overwatch Contenders Europequalifiers, and play together regularly in online tournaments. Their synergy will undoubtedly be strong, but they will have to step up to match the mechanics and strategy of their opponents.

Finally, Team Belgium: Alexandre "SPREE" Vanhomwegen of FaZe Clan will likely be the driving force here, and he is surrounded by talented players who have been competitively hungry in Overwatch Contenders EU. They will be looking to get the global audience buzzing with their skill.

So experience a little tranquility on the beach before getting hyped for the fourth and final Overwatch World Cup Group Stage in Los Angeles on August 11! For more information, visit worldcup.playoverwatch.com.