Last week, we saw Team China and Team France fight their way to the top in Shanghai, snatching up the first two places in the Overwatch World Cup playoffs at BlizzCon. This weekend, everything's coming up explodey as Groups C and D take the stage in Sydney, Australia on July 20–22.

In Group C, host nation Australia will be joined by Italy, Portugal, and Sweden.

Team Sweden has an intimidating lineup with four Misfits, one member from Team EnVyUs, and an ex-Movistar Rider. Qualifying into this year’s World Cup as the fourth-best nation in average skill of top players after an overall third-place finish in 2016, Sweden are expected to be a powerhouse in this group stage and an intimidating opponent for all comers. This weekend will tell if the roster has had enough time to gel, but if anyone can do it, Team Sweden are likely to do it better than most.

Already confident in their synergy, Team Australia includes the entire Blank Esports roster. After competing in and dominating the Australia-New Zealand scene, Blank moved to the Overwatch Pacific Championship, where they recently finished the inaugural season in a respectable second place behind Chinese Taipei's Flash Wolves. They will have their work cut out for them here in Group C, but the home crowd loves an underdog, and will cheer for their nation until the end, whether it be bitter or sweet.

Don’t sleep on Team Portugal—two of the players are former K1ck Esports teammates, Nuno ‘kiler4fun’ Ferreira is already established as a strong FPS player in Europe, and two of their members are from the Laser Kittenz, who qualified for Overwatch Contenders Season One in Europe. They’re in a similar position to Team Sweden; looking to build match-winning synergy between members from different teams as they fight to move on to BlizzCon.

Rounding out Group C is Team Italy. Half of their roster is made up from members of UB Team, who were knocked out last month in open qualifiers for Overwatch Contenders Season Zero in Europe. On paper, that looks disappointing, but they only lost to teams that made it into the 16-team group stage out of over 750 squads. Italy’s true potential is yet to be realized, and spectators will cheer to see what the team can do in Australia. 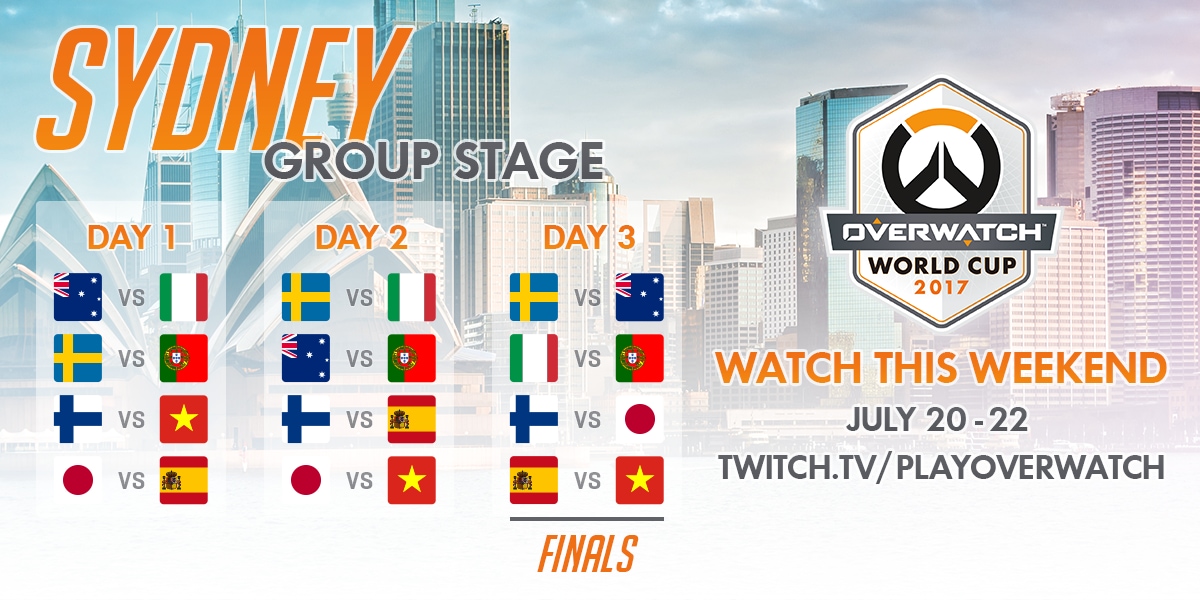 Team Finland qualified for the 2017 Overwatch World Cup as the fifth seed, just behind Sweden. Their committee has selected the entire roster of Rest In Pyjamas to represent Finland, save a DPS role going to Timo ‘Taimou’ Kettunen from EnVyUs. Rest In Pyjamas recently finished tied for fifth in Overwatch Contenders Season Zero in Europe, so they’re relatively formidable even without an Overwatch APEX champion by their side in Taimou. They’re the most dominant nation in Group D on paper.

Next, Team Japan. DPS and Support roles are filled by members of USG Iridata, a team that has consistently dominated the Japanese local scene. Two members come from Libalent Supreme, who recently qualified for Season 2 of the Overwatch Pacific Championship. Team Japan is definitely showing up with the best they have, and it’ll be interesting to see how they stack up against the rest of the world.

Like Team Finland, Team Spain is also fielding their local Team EnVyUs member, Jonathan ‘HarryHook’ Tejedor Rua. This will be HarryHook’s second appearance for Team Spain. Last year, he and the squad finished in the top eight at BlizzCon, and they’ll be looking to do at least that well again here in 2017.

Finally, we have Team Vietnam, which is made up of the entire roster of CyzoneVN. This roster took first place earlier in July in the Overwatch SEA tournament, dominating some of the best teams in Southeast Asia. Like Team Australia, Team Vietnam have had more practice than most working as a team, and are no doubt eager to see how their strategies fare against talented rosters from other regions.

Grab your mates and tune in July 20–22 as the next two teams entering the playoffs are decided!