Play Overwatch® FREE May 5–9 During the Open Beta

Prepare to clash on the battlefields of tomorrow and take your place in the ranks of Overwatch®—a legendary force of soldiers, scientists, adventurers, and oddities. Assemble your friends and try out the ultimate team-based shooter for FREE during the Open Beta May 5–9 on PC, PlayStation® 4, and Xbox One!

The Overwatch Open Beta will be available May 5–9 on PC, PlayStation® 4, and Xbox One! Players who have pre-purchased or pre-ordered Overwatch by April 29 will be eligible for early access starting May 3.

Each phase of the Open Beta (Early Access and All Access) will launch in all gameplay regions at the same time globally. To find out when the Open Beta will be launching in your region, please see the reference guides below.

The early access portion of the Open Beta will begin on all supported platforms May 2 at 4:00 p.m. PDT (11:00 p.m. UTC). An early access key will be required to play—click here for details.

The all access portion of the Open Beta will begin on all supported platforms May 4 at 4:00 p.m. PDT (11:00 p.m.UTC). All players will be able to play for FREE during this period; no sign-up or code required. 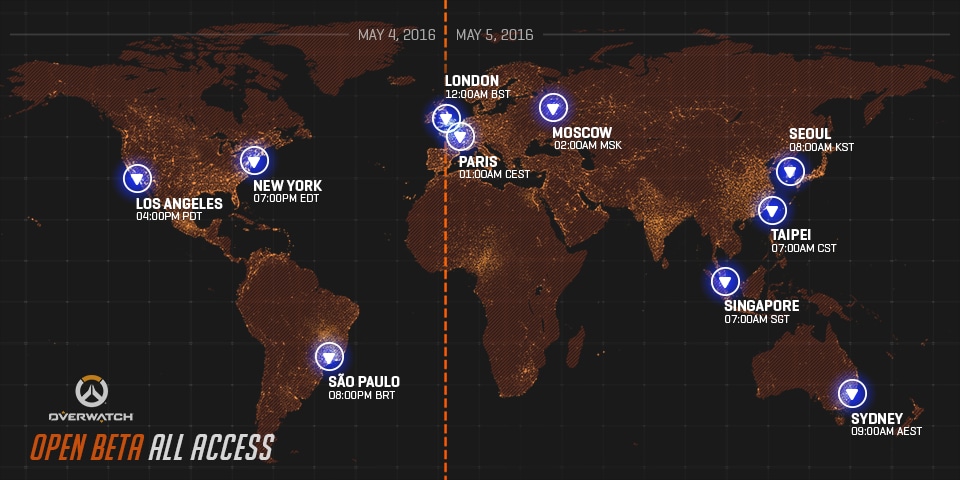 Before you begin, you'll first need to download the Overwatch Open Beta on your chosen platform. To install and play on May 3 (for Early Access) or May 5 (for All Access), please follow the instructions below.

Step 1: Download and install the Battle.net desktop app, if you haven't already, and launch it.
Step 2: Create a FREE Battle.net account, or log in with an existing account.
Step 3: Click the "Overwatch" icon, located on the left-hand side of the Battle.net desktop app.
Step 4: Select your region from the drop-down menu, then click "Install" to begin the installation process.
Step 5: Once installed, click "Play" to begin!

Step 1: Turn on your PlayStation 4 and log in to your preferred local user.
Step 2: Go to PlayStation Store and select "Search" from the top menu.
Step 3: In the search field, type in "Overwatch."
Step 4: Select "Overwatch Open Beta" from the search results and then click "Download."
Step 5: Once the download and installation process is complete, click "Start" to begin!

Step 1: Turn on your Xbox One and log in to your Xbox Live account.
Step 2: Go to the Xbox One Store, select "Games," then select "Search All Games."
Step 3: In the search field, type in "Overwatch."
Step 4: Select "Overwatch Open Beta" from the search results and then click "Download."
Step 5: Once the download and installation process is complete, click "Launch" to begin!

Q. How many heroes are available in Overwatch?
A. There are 21 heroes available to play in Overwatch! To learn more about these heroes, click here.

Q. How many players does each mode support?
A. All game modes and maps currently support 12 players in a 6v6 format.

Q. What different play modes are available in Overwatch?
A. There are a variety of ways to play Overwatch!

Q. Will there be any sort of maintenance planned during the Open Beta?
A. There's no downtime or maintenance currently planned for the Open Beta on any platform. If this plan changes at any point, we'll be sure to provide information about major service interruptions in the official beta forums. For additional status updates, be sure to follow @PlayOverwatch on Twitter.

Q. What are the PC system requirements for the Open Beta?
A. See below!

For the best performance, please be sure to update to the latest drivers available for your graphics card.

Q. Can I stream or create content about the game during the Open Beta?
A. Absolutely! There is no non-disclosure agreement (NDA) for the Open Beta. You are encouraged to take screenshots, livestream your play sessions, record feedback videos—whatever your heart desires.

Q. Can I run tournaments with a prize pool during the Open Beta?
A. You are welcome to run tournaments (with or without prize pools). Prior to the game's launch, however, we will not be issuing tournament licenses for large-scale events with prize pools over $10k. For smaller events, please review our Community Tournament Guidelines before you begin planning to make sure your community tournament is in compliance.

If you would like to begin discussing your tournament plans for after game launch, or have any other questions, feel free to reach out to tourneyinfo@blizzard.com any time.

Q. What is the business model for Overwatch?
A. Overwatch is currently available for pre-purchase on Windows PC, PlayStation 4, and Xbox One. For more information, visit  www.buyoverwatch.com.