Overwatch™ is coming to Windows® PC, PlayStation®4, and Xbox One™ in Spring 2016. Prepare for battle by pre-purchasing today and receive the Noire Widowmaker skin at launch!

Join the fight for the future with Overwatch: Origins Edition, which includes all 21 extraordinary heroes and launch-day maps, as well as an arsenal of Overwatch-themed content* for several Blizzard Entertainment games. Check out the video below to learn more or visit www.buyoverwatch.com now to secure your copy!

[Diablo III] Mercy's Wings: Slay demonic forces throughout the High Heavens and Burning Hells while donning Mercy’s wings, and all of Sanctuary will know of your allegiance to Overwatch!

[Hearthstone] Overwatch Card Back: If you happen to find yourself in a Tavern Brawl, show your opponent you’ve got backup with an Overwatch-themed card back.

[World of Warcraft] Baby Winston Pet: Adorably cuddly and highly intellectual, the Baby Winston pet will be at your side as you fight to extinguish the Burning Legion.

[Heroes of the Storm] Tracer Hero: The calvary's here! Jump into the Nexus with Tracer and surprise your enemies in the blink of an eye.

Overwatch will be available in a limited, retail-only Collector's Edition, which contains all of the content from the Origins Edition along with a full-color art book, the Overwatch soundtrack, and a high-quality collectible statue of Soldier: 76—the vigilante alter ego of former Overwatch commander Jack Morrison. 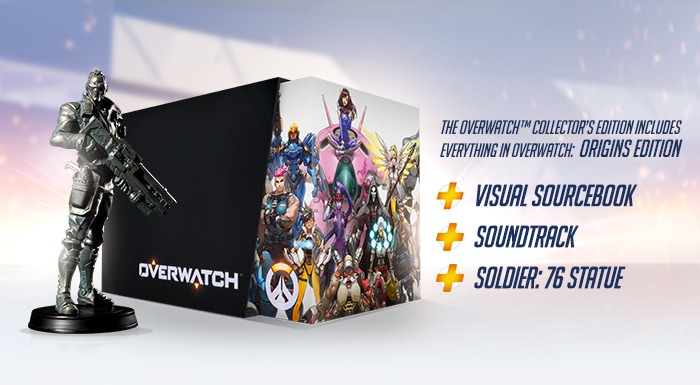 Windows PC gamers also have the option to download a digital-only PC edition, which includes all 21 heroes and launch-day maps, providing players with the core Overwatch experience.

The future is now. Are you with us?