Funk and flavor: Behind the new Overwatch Anniversary skins

Funk meets (Junk)food in this year’s Overwatch Anniversary event, with Baptiste donning his grooviest garb and Junkrat sporting his most explosively-enticing ensemble yet. With the fifth Anniversary celebration in full swing, we caught up with senior concept artist David Kang to talk about two of the new Legendary skins: Funky Baptiste and Junkfood Junkrat.

While skins for other events like Halloween Terror and Winter Wonderland tend to work within the constraints of a seasonal thematic, the Anniversary event is a chance for artists on the Overwatch team to unlock their mental vaults and pen some of the year’s wildest skin concepts.

Kang oversaw each skin’s journey from concept to completion. He also supervised the work of the talented artists from outside Blizzard that the team was lucky to work with, ensuring that the finished look of each skin had a perfect amount of Overwatch charm and flair. 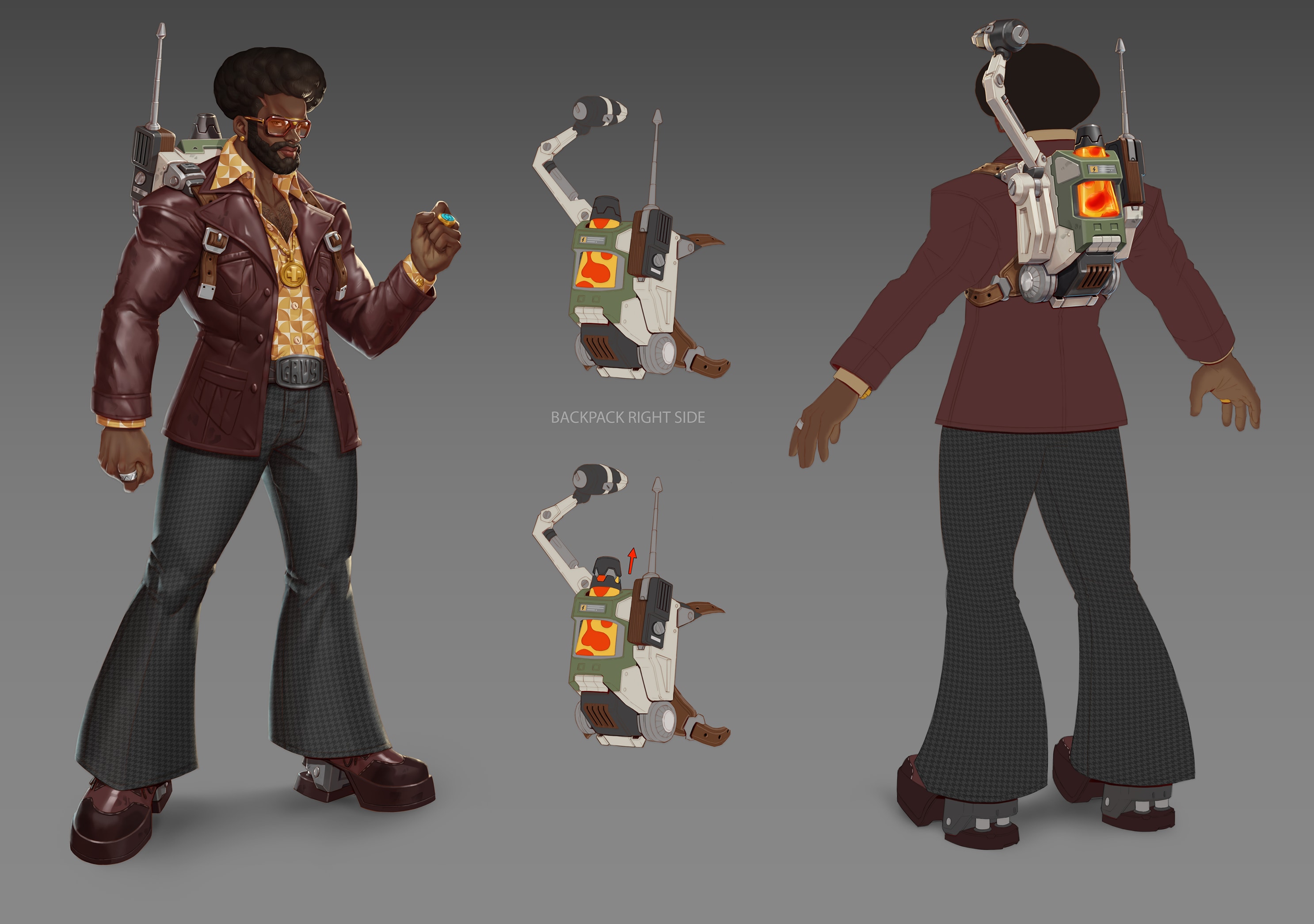 “Working with artists outside of Blizzard is pretty exciting and challenging at the same time,” says Kang. “I love working with amazing, talented artists from around the world. They each have their own unique art style so, in the beginning, it’s definitely a challenging experience to help them adjust to the style of Overwatch. The best part is seeing the end result of the concept coming to life.”

The end result? “Skins that are unique and exciting,” says Kang. “I feel like they both exaggerate the heroes’ characters. Baptiste’s skin somehow makes him look even more cool, and Junkrat’s skin makes him feel even more crazy… in a good way.”

Before bringing Baptiste’s ‘70s-themed couture to concept, Kang had ruminated on the idea for over a year, waiting for the right moment to dress everyone’s favorite field medic in his funky fit. “I was inspired by a lot of shows and movies I grew up watching,” Kang recalls. “I thought Baptiste would look so cool in the 1960s-1970s groovy theme, wearing a leather jacket and all that jazz.”

The sleek maroon leather jacket donned by Baptiste in this skin ended up being Kang’s favorite part of his final look. “I’m very into leather jackets,” Kang says, “and they’re one of the few things I splurge on. It's definitely one of the reasons I put one on him. That jacket just looks so good on him! Also, all the equipment on his back is in the blocky, simple style of the products in the ‘60s and ‘70s. We took inspiration from the older computers, lava lamps, tape recorders, and more.”

To ensure Baptiste’s final look maintained a balance between retro-chic and technologically functional, Kang scoured references for everything “funky and groovy” from the ‘60s and ‘70s. He researched everything from clothing patterns, to materials commonly used during the era, to trendy haircuts and jewelry in a funk-driven fervor to craft Baptiste’s legendary new look. “It was challenging getting the fashion down. You have to be able to know what time he’s from without anyone telling you. But I love that period. Everything just looked so fashionable.” 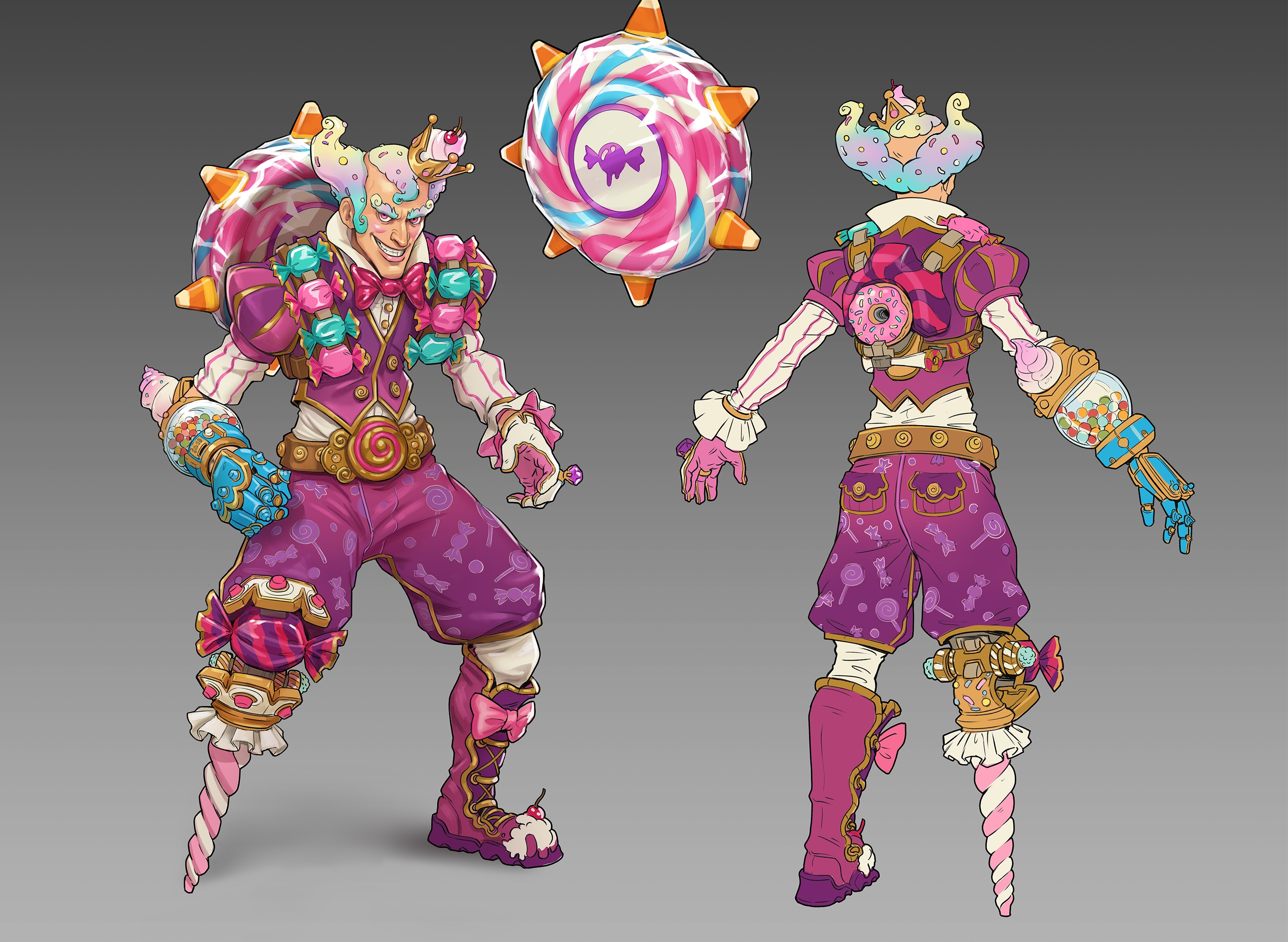 Junkrat’s technicolor candy-coated costume is a notable pivot from Baptiste’s groovy threads, and Kang, along with Overwatch concept artist Morten Skaalvik, ensured that each gumdrop and wisp of whipped cream was rendered with love.

“The initial sketch for Junkrat’s skin was done by Morten,” says Kang. “I think the inspiration was just candy and the hyper effect you get from eating all the sugar. Junkrat’s already super twitchy and hyper all the time; the candy theme fits him well. I also think his favorite candy would probably be chocolate-covered kangaroos filled with caramel!”

One of Kang’s favorite details on Junkrat’s skin is the conversion of his standard mechanical arm into a bubblegum-dispensing prosthetic that, in Kang’s words, “jiggles when he wiggles.”

If you’re lucky enough, he might just let you crank a quarter into it for a mid-payload pushing snack.

Cheers to five years of Overwatch! To celebrate, we’re bringing back fan-favorite brawls and packing Anniversary Loot Boxes with commemorative items from the past. Log in now to earn a Legendary Anniversary Loot Box and pick up an extra if you purchase a 50 Loot Box bundle!