We're at the halfway point in the Overwatch World Cup Group Stage. Four nations have already fought their way to BlizzCon: China, France, Sweden, and Australia. This week, we fly to the European esports heartland of Katowice, Poland, as Groups E and F take the stage August 4–6.

The Polish fans will be in for a treat, as last year's Overwatch World Cup champions, Team South Korea, enter Group E. This national team was always going to be a force to be reckoned with, but with such a large pool of skilled local players, only time will tell if this selected roster of six will be the best representation of the high caliber of talent in South Korea.

Joining South Korea in Group E is Team Netherlands, who have been scrimmaging often in the lead-up to this event. The team’s most distinguished player is Thomas "Morte" Kerbusch, who recently won Overwatch Contenders Season Zero in Europe with his team EUnited. He’s not alone in his high level of skill – the whole team is strong, and should be ferocious on stage.

Next, the home side, Team Poland. One of their players, Matwoj, may be familiar—he was a member of the infamous Overwatch Contenders team Straight Outta Comp Queue. The spirited Polish crowd will be cheering their team onward, and we will see if they can help make this pick-up roster shine in what is undoubtedly a stacked group.

Rounding out Group E is Team Austria, whose most notable team member is Patrick "Wot7" Marwal of Ninjas with Attitude, who made the top 16 in Overwatch Contenders. Joining him are a group of locally established, consistent Austrian players. They’re in the same boat as Team Poland – Netherlands and South Korea are the favorites to top this group, and it will take a lot of work for Team Austria and Poland to challenge their opponents’ strengths. 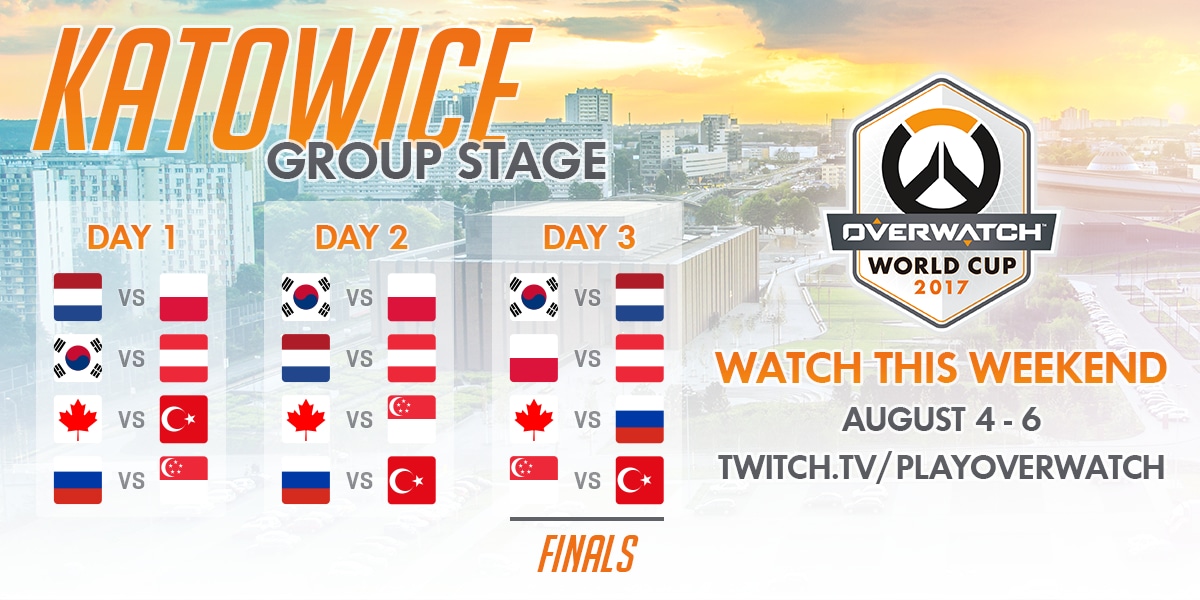 Team Canada is an all-star roster, with players from many well-known competitive rosters. Boasting representatives from Immortals, Cloud 9, FaZe Clan, Renegades, and Arc 6, the Canadian national team is not messing around – these players have a lot to prove leading into Overwatch League, and they will want to showcase their skills here in Katowice.

Next, 2016 Overwatch World Cup finalists Team Russia. They only dropped one map last year on their run to the grand finals, where they were bested by South Korea. This year, they will be looking to prove their dominance once more. For all you Genji mains out there, keep your eyes on George "ShaDowBurn" Guscha – his play is the stuff of nightmares for all who face him, but a lot of fun to watch.

Team Singapore will be flying all the way from Southeast Asia to compete in Katowice. Last year, they fought their way to the top 16 in the Overwatch World Cup. With two members each from local teams ChaosTheory.Orion and Elvellon, they’ll be looking to perform even better in 2017.

Finally, rounding out Group F, Team Turkey. They come into this tournament as the 26th seed and will be a large unknown for the nations they will be competing against. Team Turkey will have nothing to lose, and will be looking to put their nation on the map for competitive Overwatch.

Eight nations will compete, but only two will rise to the top. Join us from August 4–6 at to see which national teams will move on to the Overwatch World Cup playoffs at BlizzCon!